April 12 (UPI) -- Tom Brady called Lamar Jackson a "beast" on a post linking the quarterback to the New England Patriots in the NFL Draft.

The future Hall of Famer commented on an Instagram post from the NFL Network. The post featured the Louisville quarterback photoshopped in a photo with Patriots coach Bill Belichick.

It featured a quote from NFL Network personality Bucky Brooks.

Brooks said: "I believe after watching Deshaun Watson tear up his defense, he [Belichick] said, 'I want a player like Lamar Jackson.'"

Deion Sanders commented on the post, saying "about time they get the revelation."

Brady followed that up by saying: "He's a beast." 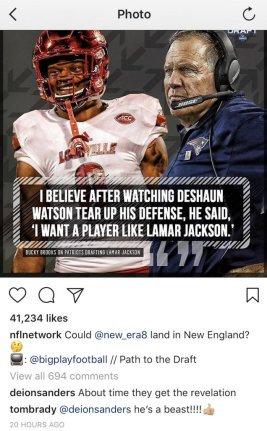 After seeing Brady's comment, Jackson replied with a goat emoji, referring to Brady as the greatest player of all time. "The [GOAT] spoke," Jackson Tweeted.

RELATED Rosen: 'I'm the best QB in the draft'

Jackson is compared to Michael Vick in his NFL.com draft profile.

Brady, 40, is coming off his 18th season. The 2017 NFL MVP led the league with 581 passing attempts and 4,577 passing yards. Brady completed 66.3 percent of those throws for 32 touchdowns and eight interceptions, leading the Patriots to a 13-3 record.

Sources told Bleacher Report that the Patriots are the team most interested in the dynamic Louisville quarterback.

Patriots director of player personnel Nick Caserio attended Jackson's Louisville Pro Day. Yahoo Sports recently pointed out other links the Patriots have to Jackson. Former NFL executive Mike Lombardi previously worked for Belichick and the Patriots from 2014 to 2016. During that time, his son Matt was an offensive assistant at Louisville. Jackson also ran a similar offensive system to that of the Patriots while he was with the Cardinals.