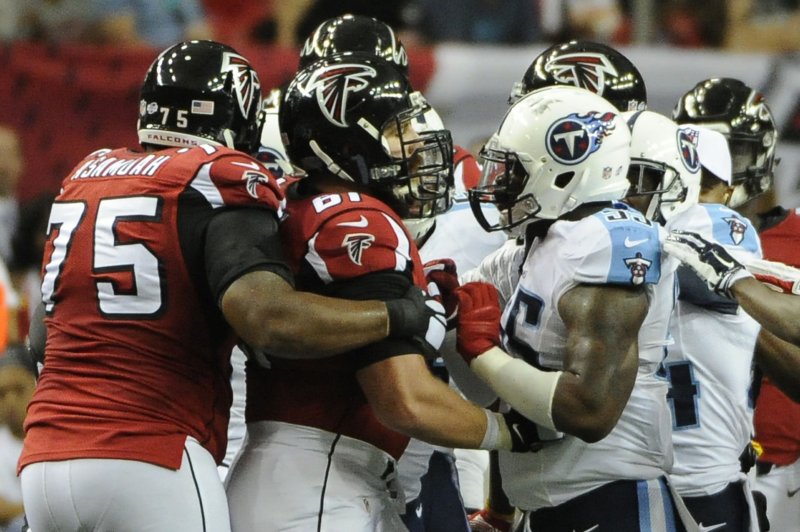 Former Atlanta Falcons center Joe Hawley (61) is held back by Jon Asamoah (75) as he confronts Tennessee Titans linebacker Zach Brown (R) during the first half on August 23, 2014 at the Georgia Dome in Atlanta. File photo by David Tulis/UPI | License Photo

Former NFL center Joe Hawley has retired and literally is hitting the road.

Along with Freedom, a boxer mix rescue dog, Hawley is embarking on a six-month journey that he hopes will take him to the 48 contiguous states.

The eight-year veteran, who spent three seasons with the Tampa Bay Buccaneers and five with the Atlanta Falcons, has sold or given away most of his possessions to charity.

"If it doesn't fit in my van, I'm giving it away," Hawley told ESPN. "I thought about putting it in storage when I'm on the road, but I kind of want to start over when I'm done with the trip and have a fresh start, so I decided to give it all away. I don't need a lot of things to be happy."

Hawley has lost 50 pounds and said he won't miss the stress that comes with playing football. His itinerary is not set, but he plans to make stops at Niagara Falls, Mount Rushmore and Glacier National Park.

"It was always an idea I had. I never really ran with it," Hawley told the Tampa Bay Times. "When I decided I was done playing, I started getting stressed out about what I wanted to do. I took a step back: 'Dude, you've got money. You're single. You're 29. You don't have a job. Take advantage of the opportunity.'"

Hawley will start his journey in his 10-year-old customized cargo van in the Florida Gulf Coast. The van has a fold-out bed, mini-kitchen, solar cells and just about everything he needs for the journey of a lifetime.

He plans to wash clothes at laundromats or at friends' houses along the journey.

Hawley told ESPN he won't be watching any football, but will keep up with his fantasy baseball team on his iPad.

"I'm done with that fight," Hawley said. "I'm ready for the next dream." 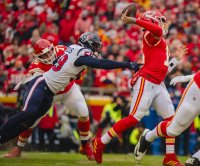 NFL // 17 hours ago
Browns' Baker Mayfield to miss TNF matchup vs. Broncos due to shoulder injury
Oct. 20 (UPI) -- Cleveland Browns star quarterback Baker Mayfield was ruled out of his team's "Thursday Night Football" matchup against the Denver Broncos because of a nagging shoulder injury.