New Orleans Saints running back Mark Ingram (22) goes 50 yards for a touchdown with under two minutes left in the game with New York Jets on December 17 at the Mercedes-Benz Superdome in New Orleans, La. Photo by AJ Sisco/UPI | License Photo

April 4 (UPI) -- New Orleans Saints running back Mark Ingram was on the wrong end of a security dog tackle recently while he participated in the NFL-USO tour in Europe.

The Saints running back and other players decided to do an exercise involving the military security guard while they were visiting Aviano Air Base in Italy.

NFL.com's Marc Sessler posted a video of Ingram's attempt, which did not go well.

The 5-foot-10, 215-pound running back ran ahead of the dog before it was released in pursuit. The dog caught up quickly and jumped up to Ingram's neck, biting the back of his outfit. The dog clinched its teeth down and whipped Ingram to the ground before being separated from the two-time Pro Bowler.

NFL-USO Tour, Day 2: Versatile @Saints back @MarkIngram22 decided to test his luck against a security work dog here at Italy’s Aviano Air Base.

"Listen, man. The dog video ... there is a lot that goes into it. It was a crazy situation. Everybody: I was peer pressured. I haven't fell in to peer pressure my whole life. And they peer pressured me to go out here and get attacked by this dog," Ingram said in another video from Sessler.

"So the first time, he just ran up close to me, bit my arm and I handle him. Second time, he's a little farther away. He bit my arm, I handle him. Then the third time, they said run away from him. I'm like 'Ok, I'm going to run.' Everybody else was like: 'Juke him, juke him. Make him miss.'"

"No, no, no ... the dog looked excited so I'm like no, I'm not going to juke him. So I started running and then I saw him behind me. And I was like Ok, let me spin out of it. Then I spun and he got my arm. Then he spun me, he horse collared me. But I got up though. Like a champ. Because I'm a beast. I can't let him hold me down. But the dog, he was a bad mutha. I'll tell you that."

Ingram also posted a video of Garland getting taken down by the dog. Garland stands at 6-foot-5, 275 pounds. 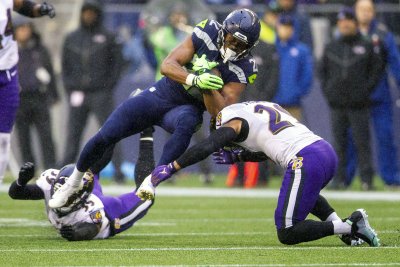