Gronkowski joined his brother Gordie in making a special hospital visit to Chicopee (Mass.) native Lauren Meizo at Brigham and Women's Hospital in Boston on Monday.

"It was incredible. He was so down to earth!" Meizo told the Boston Herald after her 45-minute visit with the five-time Pro Bowl selection. "My nerves were gone once we started talking. It was a dream come true."

Meizo, who wished for Gronkowski to pay a visit in a YouTube video that she made March 25, is awaiting her turn to receive a new heart. Her first transplant in 2013 was unsuccessful and now she also needs a new kidney.

Gronkowski surprised Meizo with a big hug, telling her it was "what the doctor ordered."

While Gronkowski did his best to accommodate Meizo, he hasn't publicly done the same in regard to revealing his future amid reports that he may retire from the NFL.

Per an ESPN report on Sunday, coach Bill Belichick is frustrated that Gronkowski hasn't committed to the team for the upcoming season. The 28-year-old Gronkowski reportedly isn't too keen on "The Patriot Way" as well, prompting his contemplation of retirement shortly after the team dropped a 41-33 decision to the Philadelphia Eagles in Super Bowl LII on Feb. 4.

Gronkowski reportedly drew the ire of Belichick following his comment on a social media post regarding former Patriots wide receiver Danny Amendola's offseason signing with the AFC East-rival Miami Dolphins. "Be FREE, Be HAPPY," Gronkowski wrote in a comment under a video of him hugging Amendola during a post on March 14.

Despite the rumored rift, ESPN cited sources as saying that Gronkowski is "pretty certain" to return as long as quarterback Tom Brady remains with the team.

Gronkowski raised questions about his status when he said the following after Super Bowl LII: "I mean I'm definitely going to look at my future, for sure. I'm going to sit down the next couple of weeks and see where I'm at." 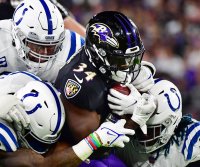 NFL // 1 week ago
Patriots legend Gino Cappelletti, AFL's all-time leading scorer, dies at 89
May 12 (UPI) -- Gino Cappelletti, one of the original members of the then-Boston Patriots in 1960 and the American Football League's Most Valuable Player in 1964, has died. He was 89.
Advertisement