Retired Browns OT Joe Thomas not sure what future holds 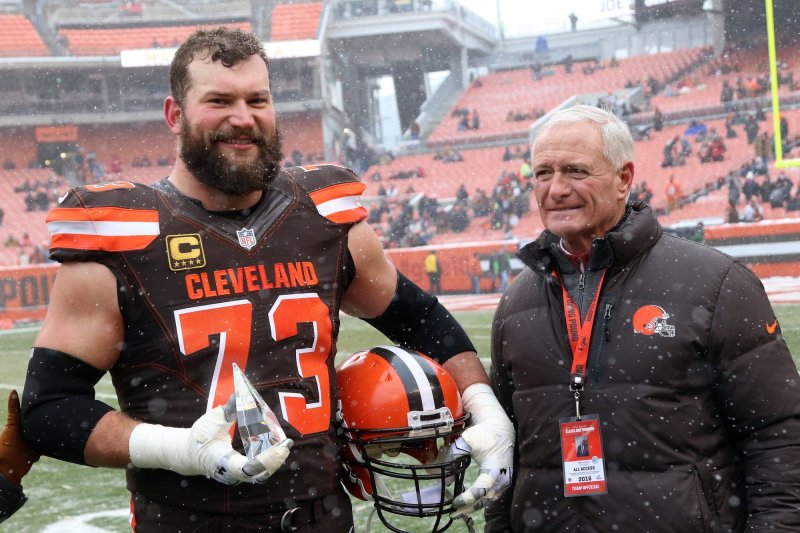 Joe Thomas officially said goodbye to his playing career and looked ahead to what comes next.

The longtime Cleveland Browns offensive tackle held a press conference to announce his retirement on Monday.

"I've had a lot of outstanding memories of my 11 years in Cleveland," Thomas said.

Thomas, who played 10,363 consecutive snaps over 167 games and made 10 Pro Bowls, announced his retirement on Wednesday and then reflected on his career.

Thomas, 33, saw his streak of consecutive snaps end when he suffered a torn triceps in his left arm while blocking Tennessee Titans linebacker Brian Orakpo. Thomas' streak was believed to be the longest such run in NFL history.

"Not only did Joe play a lot and frequently, he played exceptionally well," Browns owner Jimmy Haslam said.

Before taking the podium, Thomas was honored by the team with statements from all six of his head coaches with the Browns, a few gifts and an award from the Cleveland media. Team staffers and fans also attended the ceremony while wearing T-shirts that read, "No Ordinary Joe."

"Joe means so much to me both personally and professionally," Browns head coach Hue Jackson said in a statement released by the team. "He has been not just a tremendous Cleveland Brown, but one of the best to ever play in the National Football League. I appreciate everything he has done for this organization and not just on the field, his leadership and what he brought to the locker room, as a coach you couldn't ask for a better captain than Joe Thomas. He earned the respect of teammates and peers around the league for the way he worked. To play 10,363 consecutive snaps, what a tremendous accomplishment. I don't know if something like that will ever be matched again."

General manager John Dorsey and Jackson presented Thomas with a fishing rod along with a vest embroidered with his number 73. The gift was symbolic since Thomas was fishing with his father on Lake Michigan when the Browns selected him with the third overall pick in the 2007 draft out of Wisconsin.

The Cleveland chapter of the Pro Football Writers Association also announced it was renaming its Browns Player of the Year Award in honor of Thomas.

Thomas also thanked his family, the fans, coaches, general managers and teammates while sharing various memories of his career. He also thanked cafeteria workers, security guards and other employees of the Browns.

Thomas said he hopes to be around football either in broadcasting or in coaching.

"I'm not sure. I think there's a few opportunities I'm exploring right now. I'm keeping all my doors open and I'm going to look for something that's the right fit for me and my family. I know part of the things that I'm excited with this retirement, obviously I'm going to be sad that I'm done with playing football, but I'm really excited to be able to spend more time with my family.

"So, whatever happens in the next phase of my life, I'm really looking forward to finding something that would fit what I hope to expect with my family life."

Before the press conference, Thomas' first five head coaches offered statements praising one of five players to make the Pro Bowl in each of his first 10 seasons in the league.

"First and foremast, congratulations on an outstanding career, including your 10 Pro Bowls, being named All-Pro multiple times and holding the record for longest consecutive snaps played," said Romeo Crennel, who coached the Browns from 2005 to 2008. "Not only are you a tremendous player, you are a tremendous person. Being able to live your dream and stay true to your heart is not always easy to do. You did it from start to finish. The importance of your family on draft day to the truth of the standard you have set for yourself as you step aside are shining examples of the person that you are. Wishing you all the best as you enter the next phase of your life. Congrats."

"Joe's commitment to the Cleveland Browns and the city of Cleveland was only surpassed by his drive to be an elite player and a great teammate. His work ethic, toughness, consistency and selflessness made him a role model for young fans to look up to and a player and person that all Browns fans can be proud of."

"It's the end of a great career for Joe Thomas. I think back to when he was drafted, and he was out fishing with his father on draft day. We joked about that a few times. But when I think of Joe, certainly I think of the total pro, the true professional where he came to work every single day. You could guarantee his effort, you could guarantee his performance. He just played at such a high level for so very long. Joe is an outstanding player and is an even better person. He has shown that through the years in the community. Who he is, how he handles himself, what he's meant for the Browns for all those years, I'm certain he'll be missed."

"From day one, Joe Thomas set the bar for what an NFL left tackle and great teammate should be during his career," Chudzinski said. "Joe made one of the toughest and most important jobs in professional football look easy for 11 years. He was an iron man who you knew you could count on to be there every day and every play. I have great admiration and appreciation for the attitude, leadership and excellence he displayed despite tough times and team struggles. His consecutive games streak is a testament to his toughness, durability and work ethic. One of the best to ever play the position, he was a great example for younger players of the right way to do things on and off the field. Joe was a throwback, old school, blue collar guy who epitomized the work ethic of the city of Cleveland and will be tremendously missed on the field by all true football fans."

"Joe Thomas is the ultimate professional and family man," Pettine said. "The amazing numbers that summarize Joe's career have been well documented yet only paint a partial picture of the man. I've heard many people say of Joe great player, even better person, and there is no truer statement. Despite the lack of team success and constant change, Joe remained steadfastly positive always pushing the Browns forward. It's hard to be in a bad mood around Joe and believe me, I tried. What he accomplished did not happen by accident. Joe's work ethic and preparation habits are among the very best in the history of this league. They serve as a tremendous example for young players wanting to play this great game for a long time. It's an honor to have coached Joe Thomas. I will be counting down the days until he is enshrined in Canton."