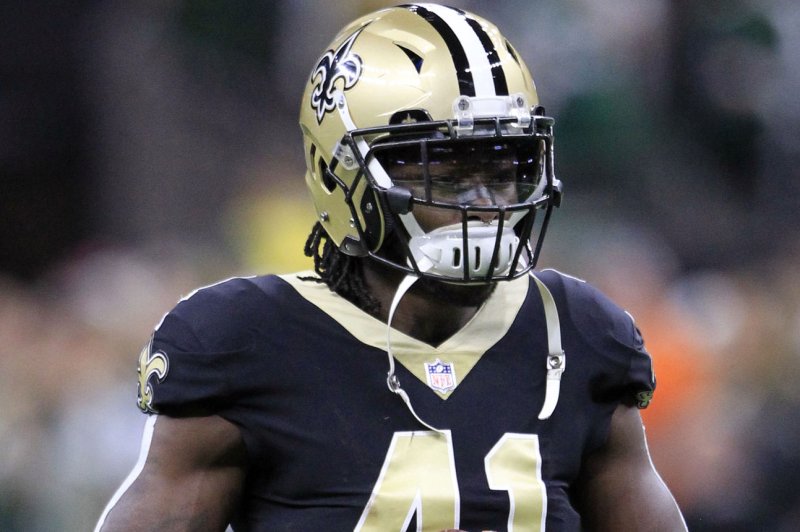 New Orleans Saints running back Alvin Kamara (41) warms up before the game with the New York Jets on December 17 at the Mercedes-Benz Superdome in New Orleans, La. Photo by AJ Sisco/UPI | License Photo

The NFL announced the honor Friday morning. He earned the award after a fan vote on NFL.com. The 2018 Pro Bowl pick led all rookies with 14 touchdowns. He ranked second among rookies in yards from scrimmage.

The league will host its annual awards ceremony -- the NFL Honors -- of Saturday night, where it will give away the Associated Press Offensive and Defensive Rookie of the Year awards.

"What y'all think!!! Thanks to @pepsi and the fans for voting me as the 2017 Rookie Of The Year!!!" Kamara tweeted Friday.

What y’all think!!! Thanks to @pepsi and the fans for voting me as the 2017 Rookie Of The Year!!! pic.twitter.com/upJOITBhtC

ARE YOU KIDDING?! #GoSaints pic.twitter.com/MAeZfelYqM

The Tennessee product is the second rookie in NFL history -- the other being Gale Sayers -- to have at least five rushing scores, five receiving scores and a kick return for a touchdown in the their first season.

NFL // 2 weeks ago
Broncos WR Jerry Jeudy released from jail, faces domestic-related charge
May 13 (UPI) -- Denver Broncos wide receiver Jerry Jeudy was arrested on misdemeanor charges, jailed overnight and released Friday after he was accused of withholding property from the mother of his child, a police spokesman told UPI.

NFL // 2 weeks ago
2022 NFL schedule release: Bills-Rams to kick off season; Broncos-Seahawks on 'MNF'
May 12 (UPI) -- The NFL will open its 2022 regular season inside Los Angeles' SoFi Stadium, as the defending Super Bowl champion Rams will host the Buffalo Bills on Thursday, Sept. 8.
Advertisement