The Chicago Bears once again looked to the college ranks to bolster their coaching staff.

The Bears have hired former Oregon head coach Mark Helfrich as the team's offensive coordinator, according to multiple reports Thursday.

The move comes one day after Chicago hired Harry Hiestand as its offensive line coach as part of the team's staff under new coach Matt Nagy.

Helfrich served as the offensive coordinator for the Ducks from 2009-12 before being elevated to head coach after Chip Kelly left for the Philadelphia Eagles. Helfrich won 33 games in his first three seasons and went to the first College Football Playoff championship game before being fired after going 4-8 during the 2016 campaign.

The 44-year-old Helfrich has not worked in the NFL but has spent time as an assistant under Kelly and current Tampa Bay Buccaneers coach Dirk Koetter. He worked under Koetter at Boise State in 1998 and then followed him to Arizona State.

The Bears are looking to become more offensive-minded under Nagy, who served as the offensive coordinator with the Kansas City Chiefs prior to becoming the Bears' new head coach on Monday.

The Bears finished 5-11 in 2017 and have missed the postseason in 10 of the last 11 years. They have resided in last in the NFC North four straight seasons. 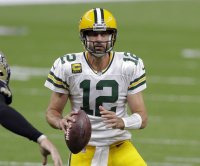