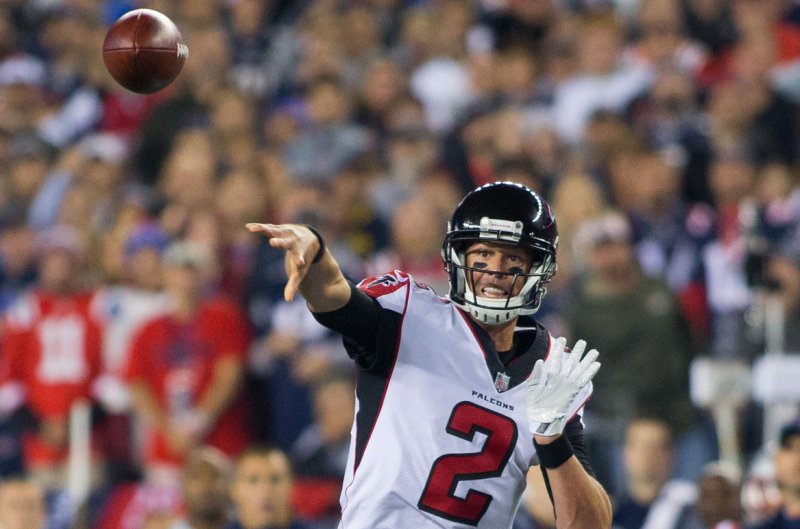 Atlanta Falcons running back Devonta Freeman runs into heavy traffic as he tries to gain yardage against the Seattle Seahawks in the second quarter of their NFC playoff game at the Georgia Dome in Atlanta on January 14, 2017. File photo by Phil Skinner/UPI | License Photo

Los Angeles Rams running back Todd Gurley (30) runs for a 57-yard touchdown against the Seattle Seahawks during the second quarter of their NFC West showdown at CenturyLink Field in Seattle, Washington on December 17, 2017. File photo by Jim Bryant/UPI | License Photo

SERIES HISTORY: 79th all-time meeting. Rams lead series, 47-29-2. The Falcons beat the Rams 47-17 in the only meeting in the playoffs, on Jan. 15, 2005. The Run DVD offense, which featured Warrick Dunn, Michael Vick and T.J. Duckett, rushed 40 times for 327 yards against the Rams in the only playoff of the former NFC West division foes. The Falcons moved to the NFC South in 2002.

The Rams need to get pressure on Matt Ryan and put him in difficult throwing situations, something they are fully capable of given their dominant pass rush. Their excellent front is led by four-time Pro Bowl tackle Aaron Donald, who had 11 sacks this season. The Rams had 48 sacks, which was fourth in the league. Robert Quinn had eight, Connor Barwin five and Michael Brockers 4.5.

The Falcons will be without guard Andy Levitre, who aggravated his triceps injury against the Panthers and was placed on injured reserve.

The Rams need to take care of the football. When they do that, they win, overwhelmingly. That aside, it's imperative Todd Gurley gets going early and often, be it in the running or passing game. Establishing Gurley as a weapon allows Jared Goff to pick apart defenses in play-action and opens the field for receivers Robert Woods, Cooper Kupp and Sammy Watkins.

--Falcons WR Julio Jones vs. Rams CB Trumaine Johnson. The Rams' best cover corner will draw a big-time assignment vs. Jones, one of the most dangerous weapons in the NFL who brings 88 catches, 1,444 yards and three touchdowns to the table.

--Falcons LT Jake Matthews vs. Rams DT Aaron Donald. Donald is the most dominant interior defensive lineman in the NFL. He registered 41 tackles and 11 sacks and can put pressure on quarterbacks unlike any other D-lineman in the league. He will be a handful vs. Matthews, a skilled run and pass blocker who provides top-level protection for QB Matt Ryan.

PLAYER SPOTLIGHT: Rams WR Robert Woods. He totaled 56 catches for 781 yards and is expected to be a significant factor. The fifth-year veteran has emerged as one of Jared Goff's go-to receivers.

PREDICTION: Gurley and the Rams' offense are more dynamic than Matt Ryan's Falcons. As long as the Rams can turn it back on after resting in the finale, they should handle Atlanta.