The 23-year-old defender played safety at Oklahoma. He signed with the Oakland Raiders in May as an undrafted free agent. Thomas had 223 tackles, seven passes defensed, five tackles fora loss, four interceptions, 2.5 sacks and a fumble recovery in 51 games for the Sooners. He was a team captain and was an honorable mention All-Big 12 selection.

The 6-foot, 214-pound defender has yet to appear in a regular season NFL game. 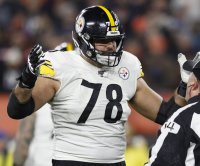