By Todd Karpovich, The Sports Xchange 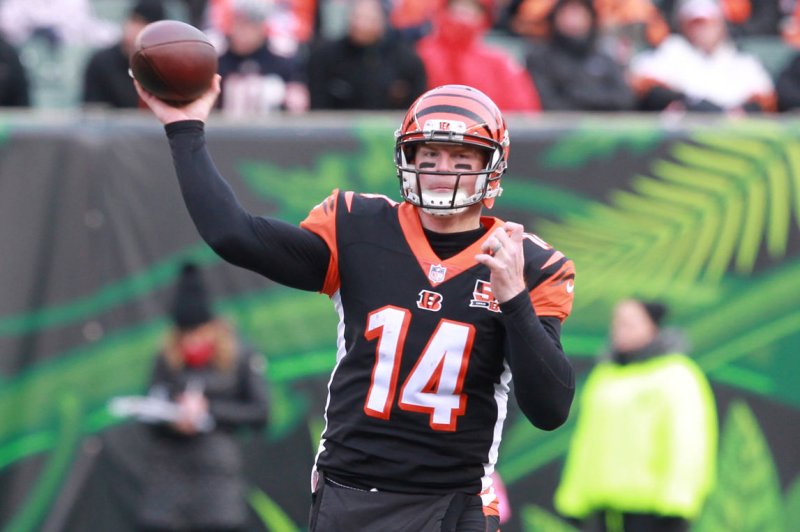 BALTIMORE -- Andy Dalton threw three touchdown passes, including a 49-yard strike to Tyler Boyd with 44 seconds left, and the Cincinnati Bengals knocked the Baltimore Ravens out of the AFC playoffs with a 31-27 victory Sunday.

Baltimore could have advanced with a win or losses by both Buffalo and Tennessee. However, the Bills and Titans won their games and took over the final two spots of the postseason.

The Ravens took their first lead, 27-24, on a 6-yard touchdown pass from Joe Flacco to Mike Wallace with 8:48 left in the game. However, Dalton answered with a 90-yard drive to reclaim the lead.

The Ravens (9-7) have now missed the playoffs for the third consecutive year. It was an emotional win for the Bengals (6-10) and head coach Marvin Lewis, who might not return after 15 seasons.

An 89-yard interception return by cornerback Darqueze Dennard on a tipped ball by Ravens receiver Chris Moore gave the Bengals a 24-10 lead with 10:17 left in the third quarter.

Flacco was let down by his receivers, who had several costly drops. He completed 25-of-47 passes for 203 yards with two touchdowns and an interception.

On a fourth-and-3, Ravens running back Alex Collins appeared to be caught in the backfield, but reversed field and ran 17 yards for a touchdown to cut the deficit to 24-17 with 6:16 remaining in the third quarter.

Baltimore pulled to within 24-20 on a 34-yard field goal by Justin Tucker with 13:08 left in the final quarter.

The temperature at kickoff was 19 degrees with a 10-degree wind chill -- the coldest home game in the Ravens' history.

The Bengals went no-huddle and took a 7-0 lead on the opening drive when Dalton threw a 1-yard touchdown pass to Tyler Kroft. A pass interference penalty on cornerback Brandon Carr against A.J. Green helped set up the score.

Despite having solid field position, the Ravens struggled to move the ball the entire half. Baltimore averaged 2.3 yards per play, had two first downs and had the ball for just 9:05.

The defense wasn't much better and allowed 126 rushing yards and 16 first downs.

The Bengals took advantage and another 5-yard pass from Dalton to Kroft extended their lead to 14-3 with 4:14 left in the second quarter.

After the Bengals' Randy Bullock made a 32-yard field goal, Moore returned the ensuing kickoff 87 yards to the Bengals 8. Flacco threw a 6-yard touchdown pass to Moore on the next play and the Ravens had life, trailing just 17-10 at the break.

NOTES: Baltimore S Eric Weddle missed out on a $1 million bonus. He had an incentive in his contract for making the Pro Bowl and reaching the playoffs in the same season. ... Bengals Jordan Evans and Hardy Nickerson split time at linebacker with Vontaze Burfict ruled out because of a shoulder injury. Evans left the game in the third quarter with head and shoulder injuries. ... Ravens WR Jeremy Maclin (knee) was inactive for the second consecutive game. Maclin, who has missed four games this season, is fourth on the team with 40 receptions for 440 yards with three touchdowns.

NFL // 20 hours ago
Jets QB Zach Wilson leaves Week 7 game with knee injury
Oct. 24 (UPI) -- Rookie quarterback Zach Wilson sustained a right knee injury in the second quarter of the New York Jets' loss to the New England Patriots on Sunday in Foxborough, Mass., and did not return to the game.