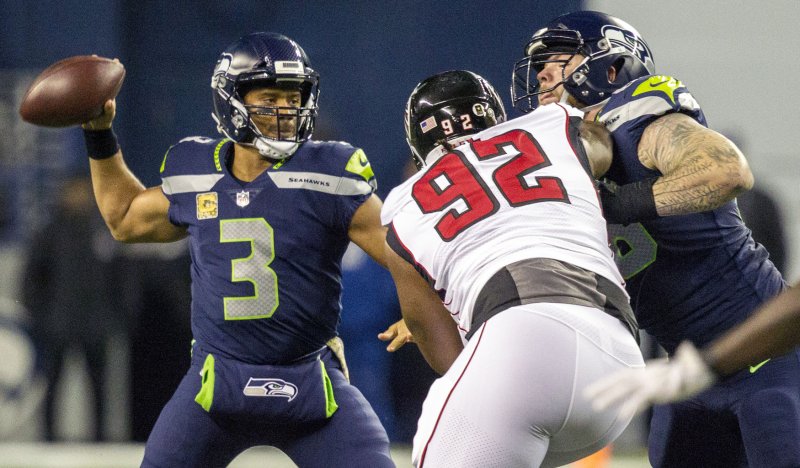 SERIES HISTORY: 38th regular-season meeting. Series tied, 18-18-1. Since division realignment in 2002, the Seahawks hold a 17-13-1 advantage. Arizona is 9-10 in Seattle but has won three of the last four at CenturyLink Field. With a victory, Arizona would match its longest road win streak in the history of the series. The Cardinals are trying to split the season series for the fifth time in the last seven years and for the ninth time since 2002. The road team is 7-1-1 over the last nine meetings.

KEYS TO THE GAME: The Cardinals will need a stout running game if they hope to topple the Seahawks at CenturyLink for a third consecutive year. Lately, the rushing attack has been there, too, except their newest featured back, Kerwynn Williams, isn't 100 percent because of a quadriceps injury. If he gives what he gave last week against the Giants -- 51 yards on 16 carries -- and Arizona can get some contributions from Elijhaa Penny and D.J. Foster, the offense will still have to come up with chunk plays to turn back Seattle at home.

Drew Stanton, who hasn't won at Seattle as a starter for the Cardinals, has to make a couple of big plays to Larry Fitzgerald, John Brown, Jaron Brown or J.J. Nelson and not get sloppy with the football.

The Cardinals will lean heavily on their defense, which has been carrying the load for the past seven weeks anyway. Coach Bruce Arians said the defense can win this game if it comes up with the plays that his offense can't.

Williams won't scare Seattle on the ground and Stanton is limited as a quarterback. The Cardinals likely won't score many points against Seattle's defense.

The onus will be on the offense to carry the load. Russell Wilson must play better than he has in recent weeks. Finding some success on the ground will prove difficult against the league's No. 4 rush defense, but it may be necessary for Seattle to stay balanced.

--Seahawks RT Germain Ifedi vs. Cardinals OLB Chandler Jones. Jones leads the league with 15 sacks and will often match up against Seattle's most vulnerable offensive lineman. Keeping Jones from wrecking Russell Wilson will be of paramount importance in a game Seattle likely will have to win through the air.

--Cardinals WR Larry Fitzgerald vs. Seahawks CB Justin Coleman. Fitzgerald is playing far more frequently in the slot in the latter stages of his career and will draw Coleman in coverage. Coleman had a big game last week against Dallas with a pick-six and will need to play well again against one of the league's most savvy receivers.

PLAYER SPOTLIGHT: Seahawks DE Dion Jordan. A former first-round pick of the Miami Dolphins, Jordan has three sacks in four games since coming off the non-football injury list. A stinger forced him to miss three games following his return. His three sacks match his total in 26 games played in Miami.

FAST FACTS: Arizona QB Drew Stanton threw for 209 yards and two TDs last week. He threw for 273 yards and a TD in the Week 10 meeting. He is looking for a third straight road start with at least two TD passes. ... RB Kerwynn Williams has 311 scrimmage yards in his past four games. ... WR Larry Fitzgerald is tied for second in the NFL with 101 receptions and became the fifth player in NFL history with five seasons of 100 catches. He leads Arizona with 1,101 receiving yards, his franchise-record ninth season with 1,000, tied for third-most in NFL history. He has a catch in 210 consecutive games and needs one to tie Tony Gonzalez for second-longest streak in NFL history. ... LB Chandler Jones leads the NFL with 15 sacks and 25 tackles for loss. He has seven sacks in his past seven road games. He has 5.5 sacks and two forced fumbles in four career games vs. Seattle. ... Rookie LB Haason Reddick had a sack and forced fumble in his last game vs. Seattle. He is one of two NFL rookies with two-plus sacks (2.5) and two forced fumbles. ... The Seahawks can clinch a sixth straight playoff berth with a win and an Atlanta loss. ... QB Russell Wilson passed for two TDs last week. He has nine TDs and no INTs in his past four games vs. Arizona. He became the first QB in NFL history with a winning record in each of first six seasons. ... WR Doug Baldwin caught a TD pass in Week 16. He had 95 receiving yards in the Week 10 meeting and has gone over 100 yards and scored in each of the past two home games vs. Arizona. ... TE Jimmy Graham is tied for second in the NFL with 10 TD catches. He caught two TD passes in his last game vs. Arizona and has five TDs in his past five home games vs. Arizona. ... LB Bobby Wagner has 50 tackles in his past five home games and has hit 10 in his past three games against Arizona. ... DE Frank Clark had a sack last week. He also has five sacks in his past five home games. ... DE Dion Jordan had a sack in his last game vs. Arizona. He has three sacks in his past four games.

PREDICTION: Wilson will rebound from a couple of rough games and do his part to get the Seahawks in playoff position.