Another season ends without playoffs for Jason Garrett, Dallas Cowboys 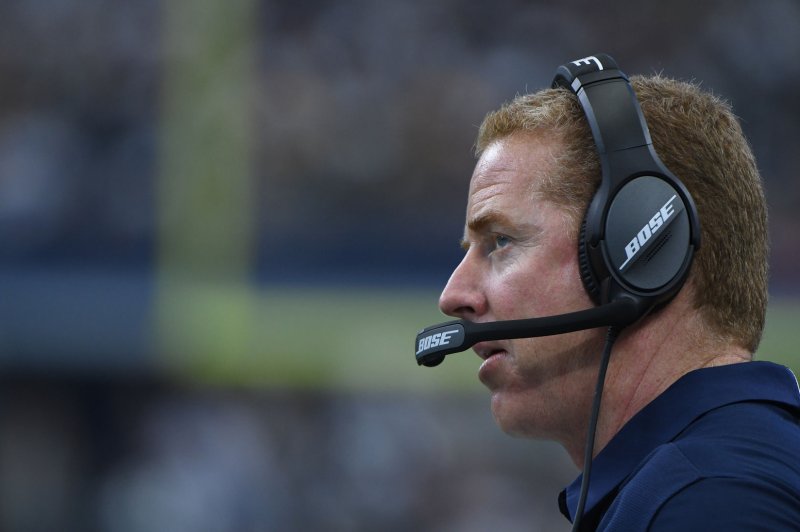 FRISCO, Texas -- The Dallas Cowboys will be home for the postseason for the fifth time in seven full seasons under head coach Jason Garrett as a result of a familiar outcome -- a failure to perform when it matters most.

A win would have allowed them to go into the season finale with a chance to make playoffs. Now they face a meaningless final game after experiencing utter disappointment one week earlier.

Yet, owner Jerry Jones sees no reason to part ways with Garrett.

"I do understand frustration right after you lose a game that has such meaningfulness as this ball game," Jones said. "But I get to look at a lot of different things and have been around a lot of head coaches and coordinators, so I feel good about our head coach."

The players haven't lost faith in Garrett or the staff, either.

"I love Coach Garrett," defensive tackle Tyrone Crawford said. "I'm not commenting on anything like that because it's way above me. ... I love this team, I love everything that we've got going and I just think we just didn't get the job done a couple times this year. It's unfortunate.

"It's unfortunate that things are being said about different people, but that's the NFL and hopefully everything works itself out for the best of everybody."

Garrett has a career record of 66-53 since replacing Wade Phillips in the middle of the 2010 season, and is signed for the next two seasons at $6 million a year. Jones handed Garrett a five-year, $30 million extension after the 2014 season.

If the Cowboys lose next week at Philadelphia, they will have finished 8-8 four times in Garrett's seven full seasons.

Asked about his future, Garrett said: "My job is to do the best job for this football team. We are going to get back to work and try to finish strong."

With their playoff dreams now dead following the 21-12 loss to the Seattle Seahawks Sunday at AT&T Stadium, the Cowboys will soon turn their attention to the offseason and remaking the team for the future.

One issue that is expected to be addressed is receiver Dez Bryant and his contract.

A disappointing 2017 has been the trifecta of three consecutive subpar seasons since he signed the contract.

The first two were blamed on injuries, but Bryant's 66 catches for 815 yards in 2017 has raised questions about whether he is still an elite receiver.

He has not recorded a 100-yard receiving game all season and leads the Cowboys with 12 drops, including two in the loss to the Seahawks. He also had a fumble that led to a Seattle touchdown that came after he seemingly complained between series on the sideline about not getting involved.

Bryant had three catches for 44 yards in the game.

Could the Cowboys ask Bryant to take a pay cut or be cut in the offseason?

"I don't even want to visit with that. We have a lot of respect for all the good things that Dez brings. He's come a long way and made some serious positive contributions to the team. I wouldn't today get into any prognosis or evaluation or prediction about what we're doing with a player other than the fact that you can look at their agreements and their contracts and know that we have them on the team," Jones said.

Jones did allow that they needed more from Bryant on Sunday.

The Cowboys opponents for next season are set.

NOTES: LB Justin Durant was waived on Tuesday. The Cowboys are expected to sign Tre'Von Johnson from the practice squad to take Durant's place. Durant played in seven games and was credited with 14 tackles, including three for a loss. He has been inactive the past four weeks after sustaining a concussion against the Los Angeles Chargers on Thanksgiving. Durant, 32, signed a one-year deal before the season. He has spent four of his 11 seasons in the NFL with the Cowboys. ... DT David Irving is unlikely to play in the season finale after missing the last three games in concussion protocol. ... CB Orlando Scandrick missed the last three games with fractured bones in his back and is unlikely to play in the season finale. He might have played his last game with the Cowboys as the team could focus on their young cornerbacks in 2018. ... DE DeMarcus Lawrence continues to lead the NFL with 14.5 sacks. He is trying to become the team's first NFL sack leader since DeMarcus Ware.

--PASSING OFFENSE: F - Dak Prescott and the passing game has been broken all season and his play and production against the Seahawks proved typical. He completed 21 of 34 passes for 182 yards and two interceptions, including a pick-six. He was also sacked four times. He got no help outside from receiver Dez Bryant, who had a fumble after a catch and two crucial drops, including a tipped pass that led to an interception.

--RUSHING OFFENSE: C - Ezekiel Elliott's long-awaited return from a six-game suspension proved to be much ado about nothing. Elliott did his part with 24 carries for 97 yards, including 15 for 73 in the first half. But he had just 15 yards on seven carries in the third quarter and didn't get one touch on first-and-goal from the 3 in the fourth quarter.

--PASS DEFENSE: B - Russell Wilson didn't pass for a lot of yards and he was sacked three times. But he didn't need to do much. He completed 14 of 21 passes for 93 yards with two touchdowns. Both touchdowns were lessons for the Cowboys rookie corners. Doug Baldwin used quick feet to run away from Chidobe Awuzie at the goal line and tight end Jimmy Graham was too big for Jourdan Lewis, who should have never been assigned to cover him.

--RUSH DEFENSE: A - The Seahawks rushed for just 76 yards on 30 carries. Quarterback Russell Wilson had 29 yards in scrambles to inflate the number. Running back Mike Davis had 15 carries for 25 yards in what was an empty showing. Credit linebacker Sean Lee, who led the way on defense with 14 tackles.

--SPECIAL TEAMS: F - Dan Bailey made four kicks in the game, including two 51-yarders but this game will be remembered for the ones he missed in the fourth quarter, especially a 34-yarder that would have put the Cowboys within one score with 5:43 left. He also missed a 48-yarder. Bailey also missed two kicks and an extra point against the Giants two weeks ago.

--COACHING: F - The Seahawks gave up 72 points in the previous two weeks, but held the Cowboys to 12 in an elimination game that featured the return of Ezekiel Elliott. The offense regressed and underachieved all season and it was plain to see when it mattered most. Jason Garrett and offensive coordinator Scott Linehan must answer for not giving Elliott the ball when it had first-and-goal at the 3 in the fourth quarter.