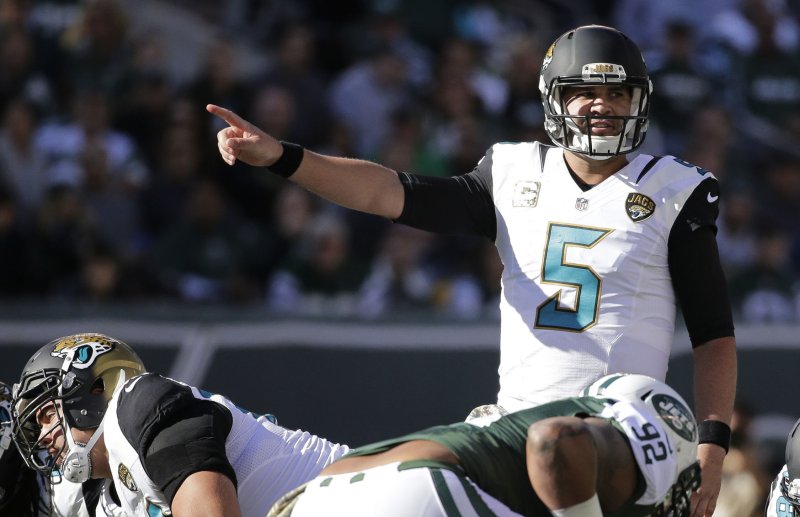 SERIES HISTORY: 5th regular-season meeting. Series tied, 2-2. The home team won the first three meetings, with the Jaguars taking two of them, so the clubs went to a neutral site (London) to settle things in their most recent head-to-head. The 49ers won 42-10 in 2013, giving them a 62-13 dominance in the last two head-to-heads.

KEYS TO THE GAME: With Leonard Fournette likely to return this week, the Jaguars should be at full strength in their running attack. But with Blake Bortles ranking as the hottest NFL quarterback in December, the Jaguars aren't likely to pull back in their passing attack. It leaves the Jaguars with options against a 49ers defense that is only average in stopping either the run or pass.

Jacksonville probably will depend on a balanced attack to begin, then emphasize whichever is more productive.

For the 49ers, why change a good thing? Ride Jimmy Garoppolo between the 20s and Robbie Gould inside the red zone. Unfortunately for San Francisco, that will be easier said than done against a Jacksonville defense that has allowed the fewest passing yards in the NFL and the second-fewest field goals.

--49ers QB Jimmy Garoppolo vs. Jaguars CBs Jalen Ramsey and A.J. Bouye. Garoppolo has turned San Francisco into a threat. The former New England backup has led the 49ers to three consecutive wins since he became the starter. He has completed over 68 percent of his passes and has thrown for 293, 334 and 381 yards. That will certainly get the attention of the Jaguars' two Pro Bowl corners. Both have excelled this year in shutting down elite receivers and have the Jaguars ranked No. 1 in the league in passing yards allowed.

--Jaguars RB Leonard Fournette vs. 49ers LB Reuben Foster. Foster, the 31st overall selection in this year's draft, has lived up to his billing. His 61 tackles are second on the team and he has reduced his rookie mistakes. He will be challenged by Fournette. The Jaguars also like to throw the short crossing routes across the middle, the area where Foster plays.

PLAYER SPOTLIGHT: Jaguars WR Keelan Cole. Cole takes over as the team's No. 1 receiver now that the team's top three receivers (Allen Robinson, Allen Hurns and Marqise Lee) are sidelined by injuries. Cole started slowly, with just eight catches in his first seven games, but he had three receptions in five of the next six games before his career-best seven catches for 186 yards last Sunday against the Texans. Cole has 32 catches for 607 yards, the latter trailing only Lee's 702 yards among Jaguars receivers. Cole has also caught a TD pass in each of his last three games.

FAST FACTS: The Jaguars clinched their first postseason berth since 2007. ... Jaguars QB Blake Bortles completed 21 of 29 for 326 yards, three TDs and no interceptions last week. He has three straight games with at least two TD passes and no INTs. He leads all NFL QBs with a 128.6 rating and is tied for first with seven TD passes in December. ... RB Leonard Fournette ranks second among rookies with 923 rushing yards and third with 1,136 scrimmage yards. He needs 77 rushing yards to become the second rookie in franchise history with 1,000 (Fred Taylor). ... WR Jaydon Mickens caught two TD passes last week, his first career multi-TD game. He is one of three NFL players (Travis Benjamin and Tyreek Hill) with two-plus receiving TDs (2) and a punt return for a TD. ... DE Calais Campbell ranks second in the NFL with 14.5 sacks. He had two sacks last week, his fourth multi-sack game in 2017. ... 49ers QB Jimmy Garoppolo passed for a career-high 381 yards with a TD in Week 15. He is the second QB in franchise history to win his first three starts (Y.A. Tittle). Since Week 13, he ranks second in the NFL with 1,008 passing yards. ... RB Carlos Hyde has 595 scrimmage yards and two rushing TDs in his past seven home games. ... WR Marquise Goodwin had a career-high 10 receptions and a team-high 114 receiving yards in Week 15. Since Week 13, he is tied for first in the NFL with 24 catches and fourth with 319 receiving yards. ... TE Garrett Celek leads the 49ers with a career-high four TD catches. ... Rookie LB Reuben Foster has 53 tackles in his past six games. He leads all NFL rookies with 7.6 tackles per game.

PREDICTION: Jacksonville can't afford to overlook a rejuvenated Niners team. A win will assure the Jaguars of hosting at least one playoff game. They won't let the opportunity pass them by.

NFL // 18 hours ago
Raiders, Giants players latest to opt out of workouts due to COVID-19
April 16 (UPI) -- Members of the Las Vegas Raiders and New York Giants became the latest on a growing list of players to announce they will skip voluntary off-season workouts, citing the ongoing COVID-19 pandemic.

NFL // 3 days ago
'Unwanted' QB Sam Darnold stung by trade, vies to improve with Panthers
April 13 (UPI) -- Quarterback Sam Darnold said he was "stung" when he became "unwanted" and traded away by the New York Jets this off-season to the Carolina Panthers, but is now focused on self-improvement and learning a new offense.