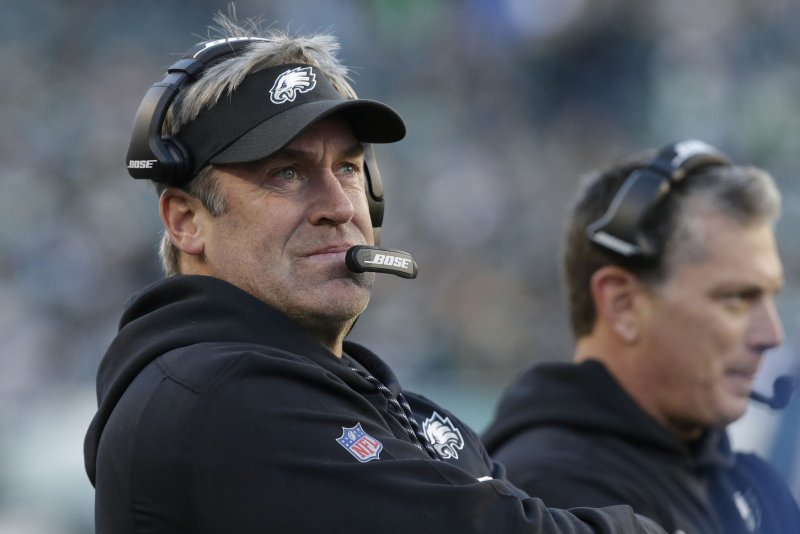 Philadelphia Eagles head coach Doug Pederson stands on the sidelines in the 4th quarter against the Chicago Bears in week 12 of the NFL regular season at Lincoln Financial Field in Philadelphia, Pennsylvania on November 26, 2017. File photo by John Angelillo/UPI | License Photo

PHILADELPHIA -- The Philadelphia Eagles clinched a first-round playoff bye Sunday with their 34-29 win over the New York Giants. This week, they can clinch home-field advantage through the playoffs with a win over the Oakland Raiders (6-8) or a loss by the Minnesota Vikings (11-3), who are the only other team still in the running for home-field advantage in the postseason.

Since the Vikings play the Green Bay Packers on Saturday night and the Eagles don't play the Raiders until Christmas (Monday) night, a loss by the Vikings could make both of the Eagles' final two games absolutely meaningless.

Asked whether he would rest many of his starters Monday night if the Vikings lose, Eagles head coach Doug Pederson wasn't ready to go there.

"I've begun thinking (about resting players), but my focus is on winning the game on Monday night," Pederson said. "Because that to me is the most important thing.

"Once we get to next week (the regular-season finale against the Dallas Cowboys), we'll figure out next week. But my mindset this week is all about the Raiders and Monday Night Football. That's the focus for me."

So, you are going to play your starters against the Raiders regardless of whether the game is meaningful to your playoff situation?

"I'm not going to cross that bridge because you're asking a question I don't know the answer to yet," he said.

If the Vikings lose Saturday night, it's likely that Pederson still would play his starters a good portion of the game. The Dallas game would be an entirely different story.

"You just make the best decisions for your football team," Pederson said. "If that means resting a guy, you rest a guy. Or two or three.

"I'm going to be smart about the decisions we have to make moving forward and getting guys rest if possible; the guys that need it."

With Carson Wentz on injured reserve, the Eagles are carrying only two quarterbacks: starter Nick Foles and backup Nate Sudfeld.

Pederson was asked why the Eagles didn't consider bringing in a veteran backup after Wentz went down rather than going with Sudfeld, who has never appeared in an NFL regular-season game.

"Probably the biggest reason is the time invested," he said. "If you bring a guy in off the street this late in the season, you're talking about spending time with that player just trying to get him up to speed on our offense. We've already spent time with Nate and developed him and worked with him."

Nick Foles' first start in place of Carson Wentz was rock solid. Sure, it came against one of the league's worst pass defenses -- the Giants are 29th in opponent passer rating (100.3), 32nd in touchdown passes allowed (30), 31st in sacks (22), 28th in yards allowed per attempt (7.8) and tied for 26th in interceptions (8). But it was a perfect confidence-builder for him. He threw four touchdown passes to four different receivers. He didn't have an interception. He completed nine of 12 passes in the red zone, including all four of his TD throws. He was 6-for-10 on third down, converting two third-and-longs on the Eagles' final scoring drive. He made good decisions. He got the ball out quickly. He eluded rushers. He executed two nice screen plays -- a 19-yarder by Alshon Jeffery on a second-and-10, and a 32-yarder to running back Jay Ajayi on first down that set up a score.

"All week we knew we could do things here and pick them apart there," Grugier-Hill said. "We went in with a really good plan and executed it."

NOTES: CB Patrick Robinson suffered a concussion trying to make a tackle in the second half Sunday against the Giants. He is in concussion protocol. ... CB Rasul Douglas was inactive Sunday for the first time since Week 1. The Eagles needed to make room on their game-day roster for special teams ace Bryan Braman, who was signed by the team last week. ... TE Zach Ertz, who missed last week's game with a concussion, had six catches for 56 yards and a touchdown Sunday against the Giants. ... LG Stefen Wisniewski sat out Sunday's game with a high-ankle sprain. While it's possible that he may play this week against the Raiders, it's more likely that the Eagles will rest him until the playoffs. ... RB LeGarrette Blount, who played only 15 snaps last week against the Rams, played just 17 snaps Sunday against the Giants. He had seven carries for 21 yards.

--PASSING OFFENSE: A - Not a bad first start for Nick Foles. Four touchdown passes, all of them in the red zone. No interceptions. Foles knows his limitations as far as mobility, so he doesn't hold on to the ball. He was sacked only once, when Olivier Vernon beat LT Halapoulivaati Vaitai. After that, both Vaitai and fill-in LG Chance Warmack did a good job.

--RUSHING OFFENSE: B-minus - Eagles didn't have a rushing touchdown for the fourth straight game and had just five rushing first downs for the second straight week. Jay Ajayi had a 22-yard run on a third-quarter TD drive and finished with 49 yards on 12 carries.

--PASS DEFENSE: D - The Eagles had a tough day against Eli Manning and the Giants' wounded receiving corps. Manning threw for 434 yards and three touchdowns. Ronald Darby had a second-quarter interception and Corey Graham made a nice game-saving play in the end zone on a throw to tight end Evan Engram. But there weren't many other highlights. Manning was 10-for-15 on third down with eight first downs and two of his three touchdowns.

--RUSH DEFENSE: B-plus - The Giants rushed for 52 yards on 12 first-half carries. But the Eagles shut them down in the second half, holding them to 2.1 yards per carry. The Giants finished with just four rushing first downs. Keep in mind, though, they came into the game with the league's fifth least productive ground game.

--SPECIAL TEAMS: A-plus - Dave Fipp's units have struggled at times this season, but Sunday was a very good day. Malcolm Jenkins blocked a fourth-quarter Aldrick Rosas field-goal attempt. Kamu Grugier-Hill blocked a second-quarter punt that set up an early TD. Derek Barnett blocked an extra-point attempt. And the kickoff coverage unit never allowed the Giants to start a drive beyond their own 25.

--COACHING: B - Doug Pederson did a good job of setting up Nick Foles for success in his first start since Carson Wentz went down. Defensive coordinator Jim Schwartz didn't seem to have any answers for stopping Eli Manning.