Tennessee Titans' quarterback Marcus Mariota leaves the field after the Titans were defeated by the Arizona Cardinals 12-7 on December 10 at University of Phoenix Stadium in Glendale, Ariz. Photo by Art Foxall/UPI | License Photo

Dec. 14 (UPI) -- Tennessee Titans quarterback Marcus Mariota admitted that his mom lectured him about being rude during a post-game news conference.

He apologized for it at Wednesday's practice.

"Real quick, I want to say I am sorry for the way handled the press conference," Mariota told reporters.

"I know not everybody that was there is here. But I was rude and inappropriate, and I just want to say I apologize for it. It's funny, because I got an earful from my mom. That's how I was raised and I appreciate you guys for understanding."

Mariota's news conference didn't come off as overtly rude or inappropriate. Sure, he gave some short answers and was obviously sulking after the Titan's loss to the Arizona Cardinals, but he never uttered an obscenity or talked down to the reporters.

He did admit he was "pissed off," which could have gotten the attention of Alana Deppe-Mariota. The 24-year-old quarterback completed 16-of-31 passes for 159 yards and two interceptions against the Cardinals.

Mariota has a special bond with his parents, Toa Mariota and Alana Deppe-Mariota. He spoke briefly about that bond during his Heisman Trophy acceptance speech in 2014. He cried while thanking them.

"Finally, Mom, Dad, Matt and the rest of my family, thank you," Mariota said during the speech. "Thank you for sacrificing and providing me and Matt every opportunity we could have. Words can't express how much you guys mean to me. I'm truly grateful to have you guys in my life."

"Mom and Dad, thank you for your love and for sharing that with me and Matt. We are truly grateful."

Titans coach Mike Mularkey didn't think it was a bad thing for his quarterback to be mad after the loss.

"I don't think it's a bad thing [he was upset]," Mularkey told reporters. "I like that about a lot of guys on our team. I can tell you a couple of years ago it wasn't emotional after a loss. It is now. And I think it's a good thing the way this team is reacting."

The third-year gunslinger has struggled this season. Mariota has just two games in 2017 with multiple passing scores. He has also only eclipsed 300 passing yards in two starts. The quarterback owns a 76.9 quarterback rating. He has completed 62.2 percent of his throws this season for 2,582 yards, 10 touchdowns and 14 interceptions. 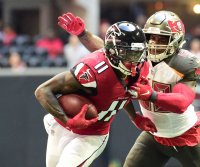