Clinton Portis, Santana Moss and Sean Taylor did shots of Hennessy before games

Dec. 5 (UPI) -- Clinton Portis said he took shots of Hennessy with Sean Taylor and Santana Moss before Washington Redskins games for more than a year before "anybody knew."

Portis made the admission last week during an interview with NBC Washington. He was in the studio with Moss as the two discussed Taylor on the 10th anniversary of his death.

The tradition began before a meeting with the Jacksonville Jaguars. The trio took the shots before Portis totaled 112 rushing yards and a score. Moss caught the game-winning 68-yard touchdown pass.

"Prior to the game, on our way, we would take a little shot," Portis said. "Not like going out and getting sloppy wasted; just adrenaline. You know, you take a shot and you were done with it. Me, Santana and Sean, we did this for a year and a half before anybody knew. We never told anybody. It was just, hey, here's a little sip, bam, that was it."

Portis and Moss also talked about their displeasure with the organization deciding to move Taylor's locker out of the locker room and into a memorial at FedEx field.

Taylor was the No. 5 overall pick in the 2004 NFL Draft. The two-time Pro Bowl selection died on Nov. 27, 2007 when he was murdered in his Miami-area home during a burglary. He was just 24-years-old.

The Redskins honored Taylor before their Thanksgiving Day game against the New York Giants. They painted his No. 21 on the grass outside of FedEx Field.

"[Taylor is] immortalized here for life," Redskins cornerback Josh Norman recently said of Taylor, according to Richmond.com. "I've got nothing but mad respect for him. I know he's dearly missed by his family and loved ones, especially our owner Dan Snyder. Definitely got to take your hat off to him. He's a living legend here on Earth." 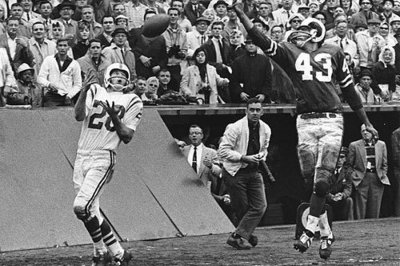