Ben McAdoo in limbo: New York Giants coach could be fired in next 24 hours

The New York Giants ownership may be ready to fire coach Ben McAdoo after Sunday's game against the Oakland Raiders, which would come less than a week after the benching of quarterback Eli Manning created a backlash from fans.

ESPN's Chris Mortensen and Adam Schefter are reporting that McAdoo could be fired within 24 hours after the game.

The decision to bench Manning could lead to firing of McAdoo in an effort to take the heat off of Giants owner John Mara, Fox Sports' Jay Glazer reported Sunday morning.

General manager Jerry Reese's standing with the 2-9 Giants is also on shaky ground but any timing on his potential departure is more uncertain than McAdoo's, ESPN reported.

Manning, who started 210 straight games for the Giants, fought back tears on Tuesday as he talked about the stunning decision by McAdoo to name Geno Smith the starting quarterback for Sunday's game.

The Manning benching by McAdoo is being considered the final straw, according to ESPN sources.

Manning, who has two years left on his contract, was asked by reporters about the future. Composing himself, he said, "I don't know. I don't know. One week at a time."

McAdoo insisted "we're on the same page" as Giants owner John Mara, who took responsibility for the way Manning was informed of the decision.

"I was honest and up front with Eli," McAdoo told reporters Friday. "I don't have any regrets there."

Manning was offered the chance to play the first half Sunday only to yield to Smith, but he declined.

"I'll be a good teammate. I don't like it, but it's part of football, you handle it," Manning said Tuesday. "I didn't do my job. I just didn't think that you start knowing that you're going to come out of a game to keep a streak alive maybe."

Mara reportedly was not happy with how McAdoo presented the plan to the franchise's two-time Super Bowl MVP quarterback.

"Jerry called me on Monday afternoon -- I was at a family function in Virginia -- to tell me that Ben was going to be speaking to Eli to let him know he was going to be continuing to start the game, but that at some point, Geno would come in.

"Tuesday morning, Jerry called me and said Eli had informed Ben that if you're going to play Geno in the second half, you may as well just start him. It's not fair to him, it's not fair to me, I think that would be the best decision going forward. He also wanted us to put out a statement announcing it. So that's what we did."

After the Giants fell to 1-8 with a loss to the then-winless San Francisco 49ers, Mara and co-owner Steve Tisch released a statement on Nov. 13 that read, in part: "Our plan is to do what we have always done, which is to not offer a running commentary on the season. It is our responsibility to determine the reasons for our poor performance and at the end of the year, we will evaluate the 2017 season in its entirety and make a determination on how we move forward."

After Manning was benched last week, Mara was asked if McAdoo was safe for the rest of the season.

"There are no guarantees in life," Mara said.

After Sunday's game in Oakland, the Giants finish with three of their final four games at home -- Dallas on Dec. 10, Philadelphia on Dec. 17 and Washington on Dec. 31. The Giants also play at Arizona on Dec. 24. 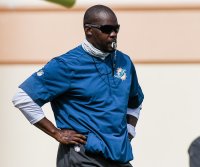 NFL // 7 hours ago
NFL Draft: Dolphins, Panthers, Giants among teams linked to trading back
MIAMI, April 22 (UPI) -- The Miami Dolphins, Carolina Panthers and New York Giants are among the teams linked to potential trades down from their current slots in the first round of the 2021 NFL Draft.