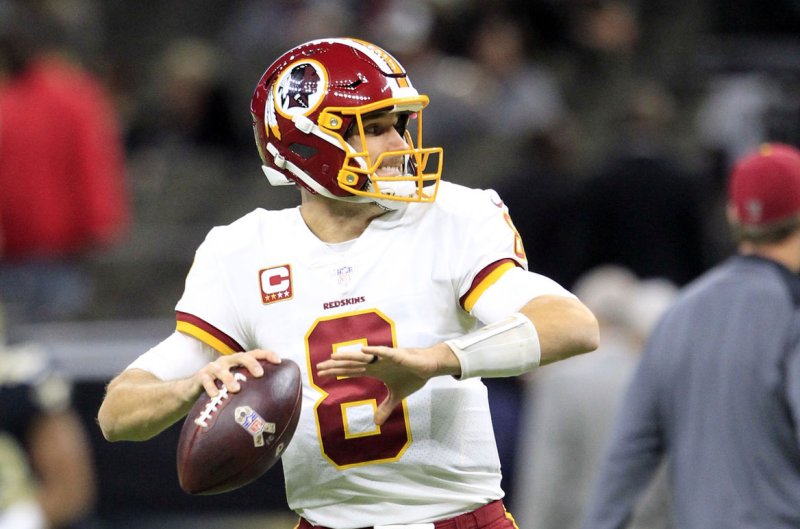 Washington Redskins quarterback Kirk Cousins (8) warms up before the game with the New Orleans Saints at the Mercedes-Benz Superdome in New Orleans November 19, 2017. File photo by AJ Sisco/UPI | License Photo

After a defensive holding penalty wiped out a third-down sack, Washington was given new life on the decisive drive at the New York 48. Cousins soon hit Jamison Crowder for 17 yards to the 16-yard line, and two plays later he found Doctson in the corner of the end zone.

Crowder finished with seven catches for a season-high 141 yards and a touchdown, and Washington running back Samaje Perine carried 24 times for 100 yards.

The win capped a banner Thanksgiving for the Redskins (5-6), as two of the teams ahead of them in the NFC wild-card race -- Detroit and Dallas -- lost.

After scoring 30 and 31 points in losses to the Minnesota Vikings and New Orleans Saints, Washington struggled with the ball as well but scored two second-half touchdowns.

With the game tied at 3 in the third quarter, Washington took over at midfield following a punt. On a blitz, Cousins found Crowder open, and the catch and run was good for 33 yards.

The Redskins went backward, and on third down Cousins avoided the rush, rolled to his right and passed 15 yards to a wide-open Crowder in the end zone with 6:32 left in the third. It was Crowder's first touchdown of the season.

On Washington's next possession, Cousins left cleat got stuck in the turf as he threw, and his high pass was tipped by running back Byron Marshall. New York cornerback Janoris Jenkins reeled it in at his own 47 and raced down the sideline, cut toward the middle and scoring to tie the game.

After an unappetizing first 15 minutes of scoreless Thanksgiving football, the offenses picked things up a bit in the second quarter.

On third-and-14 from his 24, Manning found Roger Lewis Jr. for a 19-yard gain. That sparked a 16-play, 60-yard drive that took over eight minutes and ended with an Aldrick Rosas 30-yard field goal.

On the next drive, Cousins found Crowder down the middle for 38 yards to the New York 39, but the Redskins were soon forced to punt.

Following a Giants punt, a 37-yard pass interference penalty on Ross Cockrell gave Washington a first down at the New York 11, but the Redskins settled for a 28-yard field goal by Rose with 13 seconds left in the half.

The teams totaled 236 yards in the half and were a combined 4-for-17 on third down.