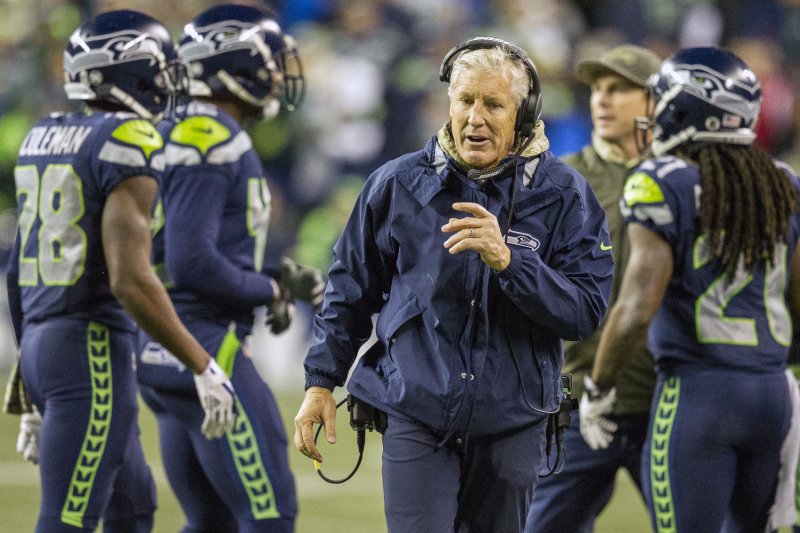 RENTON, Wash. -- A failed fake field-goal try and a pair of wasted timeouts in the second half were among strategic errors by the Seattle Seahawks in a 34-31 loss to the Atlanta Falcons on Monday night.

Grady Jarrett blew up a fake field goal with seven seconds left in the first half that left three points on the board for Seattle, which came back to haunt Seattle as the final margin of victory. Additionally, head coach Pete Carroll lost two timeouts that could have been useful on the Seahawks' final possession. The first timeout was burned to avoid a delay-of-game penalty with Seattle already in a third-and-12 situation and still in field-goal range. The second timeout was lost on a futile challenge of an incomplete pass thrown to Doug Baldwin on third-and-1.

There's no guarantee that the game plays out exactly the same way if those decisions were handled a different way, but given the circumstances of the 34-31 loss, the decisions proved costly.

"It was something we saw that we wanted to do," Carroll said. "It was a terrific opportunity right where we wanted it. The defensive tackle made a better play. He wasn't supposed to be there."

From the kicker's vantage point, Jarrett lined up on the left side of long snapper Tyler Ott. When the ball was snapped, Jarrett jumped over a gap and came through the line over the right side of Ott. With guard Mark Glowinski pulling to kick out the cornerback on the end of the line, Jarrett had a free shot at tight end Luke Willson as he was catching the shovel pass from Jon Ryan.

"It was kind of a look that we were waiting for," Willson said. "It's something that they've done all year. I don't know why, but for this game they changed it up and it was a first-time thing for them so obviously it didn't work."

Outside of Jarrett, the play was blocked perfectly with Glowinski making his block on the edge, and Ethan Pocic and Nick Vannett sealing an alley toward the end zone for Willson.

It's still a moot point unless Willson scores a touchdown on the play, which was far from certain. The remaining seven seconds of the half could have expired if Willson was stopped inbounds, leaving Seattle without any points to show for the fake attempt. The risk of a turnover that could have led to a runback for Atlanta also increases substantially in the circumstance as well.

"We knew exactly what was going on," Carroll said. "We figured we were going to break it and it was a matter of giving ourselves another shot. If we score, we keep it, and if not we get out of bounds.

"That was being aggressive and going for it and trying to get a touchdown there."

Instead, Seattle left three points on the board that could have been useful later in the game.

Additionally, the lost timeouts came back to bite Seattle as they were unable to get closer than a 52-yard field-goal attempt for Blair Walsh to tie the game in the closing seconds. The kick came up less than two yards short of the crossbar.

"I thought it was good," Walsh said. "I don't know how much it missed by, but it's tough. It's tough when you're not there for your team in a moment like that."

It's been rare that such management errors have cost Seattle football games in the Carroll era. Even when they have happened in the past, the Seahawks have been talented enough to overcome them most of the time. With injuries mounting and the margin for error significantly lessened, that luck ran out for Seattle on Monday night.

Freeney played 17 snaps and did not record a stat in Monday night's loss to the Atlanta Falcons. Freeney, who ranks 17th on the NFL's all-time sack list with 125.5 sacks, had three sacks in four games for Seattle, passing former Indianapolis Colts teammate Robert Mathis on the all-time sack list in the process.

The move with Freeney was unexpected, but given Seattle's injury issues they may have needed more help elsewhere at this point in time. The Seahawks had 11 defensive linemen on their active roster, which is more than usual for Seattle. With cornerback Shaquill Griffin dealing with a concussion, running back Mike Davis straining his groing and right guard Oday Aboushi suffering a disclocated shoulder, reinforcements could be needed at multiple positions this week. Cornerback would seem to be the most pressing need with Griffin an

No corresponding roster move has yet been made.

-- While the Falcons didn't gash the Seahawks' defense from a yardage gained standpoint, their ability to convert third downs and stay on the field was a backbreaker for Seattle.

Atlanta converted 9-of-14 chances on third down in the game, including converting 8-of-10 chances through the first three quarters. Matt Ryan frequently picked on Seattle's cornerbacks in man-to-man situations when it came to keeping the chains moving on third down.

"It was critical," linebacker Bobby Wagner said. "It allowed them to stay on the field, it allowed them to make plays when they needed to. We had to do a better job of getting off the field and getting the offense the ball back. They just did a good job. We hurt ourselves a couple times with penalties on third down, but you've got to give them credit. They did a good job."

With Shaquill Griffin out due to a concussion and Richard Sherman on injured reserve due to a torn Achilles, Seattle's cornerbacks became easy targets. Ryan attacked Jeremy Lane, Byron Maxwell and Justin Coleman when they found favorable matchups to exploit.

"A couple times penalties and he scrambled for a couple third downs," cornerback Byron Maxwell said. "Julio (Jones) made some plays but that's going to happen. We just got to get off the field. Penalties hurt. The one big one when (Matt Ryan) ran, that was big too."

-- CB Shaquill Griffin left Monday night's game after just two plays due to a concussion sustained in a collision with running back Tevin Coleman. He will need to clear concussion protocol in order to play next Sunday against the San Francisco 49ers.

-- RG Oday Aboushi suffered a dislocated shoulder in the fourth quarter of Monday night's game against the Falcons. He was replaced by Mark Glowinski, who started the first two games of the season. Aboushi is not expected to be able to play this week.

-- RB Mike Davis sustained a groin strain on a screen pass early in the third quarter and did not return to the game. He is "unlikely" to play this week, per head coach Pete Carroll.

--PASSING OFFENSE: C-plus -- Russell Wilson was spectacular at times, but a poor interception and a fumble while being sacked led directly to 14 points for Atlanta. Wilson also made two poor decisions on the final drive to throw short over the middle of the field without timeouts to stop the clock, allowing needed time to elapse before a lengthy tying field-goal try.

--RUSHING OFFENSE: D -- The Seahawks' rushing attack continues to sputter. While the team rushed for 136 yards overall, just 50 yards came from tailbacks as Wilson once again led the team in rushing. Mike Davis showed some flashes early on, but left with a groin injury. Seattle still can't run near the goal line.

--RUSH DEFENSE: A-minus -- The Falcons were held to 3.0 yards per carry on 30 attempts as lead back Tevin Coleman managed just 43 yards on 20 carries. The large bulk of Atlanta's rushing yards came on a 14-yard scramble by Ryan and a 17-yard run by Terron Ward.

--SPECIAL TEAMS: C -- While Seattle did recover a kickoff for an extra possession and mostly limited Atlanta's return game, a missed 52-yard field goal by Blair Walsh, a 50-yard kickoff return by Andre Roberts and a failed fake field-goal try before halftime put a damper on the performance.

--COACHING: D -- Game management is rarely an issue that has cost Seattle games under head coach Pete Carroll, but Monday night was an exception. A wasted timeout on a futile challenge, another lost timeout to prevent a delay of game when already in third-and-long and a fake field-goal try before halftime that left three points on the board all came back to haunt Seattle.