GREEN BAY, Wis. -- For the course of three hours on Sunday, the Green Bay Packers couldn't find the end zone against the Baltimore Ravens.

They could have played for four hours, five hours or 10 hours and the result might not have been different.

Baltimore's defense bent here and there, but never got close to breaking in beating the Packers 23-0.

It was the first time the Packers were shut out since 2006, when they were blanked by the Bears and Patriots in head coach Mike McCarthy's first season. That game against New England came exactly 11 years earlier.

The Ravens started the game by forcing three consecutive turnovers. In the second half, they got a pair of fourth-down stops and forced two more turnovers.

By the time the game ended, most of the fans in Lambeau Field were wearing the purple of the Ravens.

Even with three takeaways, Baltimore led only 6-0 at halftime. However, the Ravens struck quickly to open the second half to take a 13-0 lead, with Joe Flacco dropping a perfect 21-yard touchdown pass to receiver Mike Wallace against cornerback Damarious Randall.

The lead seemed insurmountable, barring a major blunder from Flacco, who entered the game with eight touchdowns and 10 interceptions. However, Flacco turned in one of his better performances of an otherwise disappointing season, going 22-of-28 passing for 183 yards with one touchdown and one interception for the Ravens (5-5).

Matthew Judon and Willie Henry had two sacks apiece. Terrell Suggs added a sack midway through the fourth quarter that gave Baltimore its fourth takeaway. That set up Justin Tucker's third field goal, which made it 16-0 with 4:46 remaining. One more sack by Suggs and an interception by rookie cornerback Marlon Humphrey, which set up Alex Collins' touchdown run just before the two-minute warning, clinched the shutout.

Wide receiver Davante Adams had a big day with eight catches for 126 yards for the Packers (5-5), who lost their third straight at home.

With a dominant defense and dysfunctional offense, Baltimore could do no better than a 6-0 lead at halftime.

The Ravens, who entered the game with a league-high 13 interceptions, added two on the first two possessions. On the first, the Packers had a second-and-goal at the 5, but cornerback Jimmy Smith dropped coverage on Adams to intercept an end-zone pass to receiver Randall Cobb. On the second, Hundley uncorked an ill-advised deep pass as he was about to be hit by outside linebacker Za'Darius Smith and was intercepted by safety Eric Weddle. The Ravens turned the second of those interceptions into a 32-yard field goal on the first play of the second quarter.

Baltimore added a third turnover in as many possessions when Judon stripped running back Devante Mays, with inside linebacker Patrick Onwuasor recovering.

The Ravens just couldn't do anything with their good fortune. Onwuasor's recovery gave the Ravens the ball at the Packers 43 but the offense lost 5 yards. Then, Michael Campanaro returned a punt 28 yards to the Packers 30 with 1:37 left in the half, but the Ravens couldn't get a first down and settled for a 39-yard field goal on the final play of the half.

Not that it mattered because, after its opening possession, Green Bay couldn't get past the Ravens 35.

NOTES: Packers WR Jordy Nelson moved into third place on the team's all-time receptions list with a first-series catch. He had been tied with Hall of Famer James Lofton for third with 530 receptions. ... Ravens LT Ronnie Stanley (concussion) and Packers CB Kevin King (shoulder) were the starters on the inactive list. ... Packers OLB Clay Matthews recorded his first sack since Week 4, but suffered a groin injury and did not return. Packers RT Justin McCray, starting for Bryan Bulaga (knee; injured reserve), injured a knee and was replaced by Jason Spriggs. Packers DT Kenny Clark was carted to the locker room with an ankle injury. ... Ravens RB Danny Woodhead was activated from injured reserve on Saturday and caught four passes in the first half.

NFL // 6 hours ago
NFL Draft: Dolphins, Panthers, Giants among teams linked to trading back
MIAMI, April 22 (UPI) -- The Miami Dolphins, Carolina Panthers and New York Giants are among the teams linked to potential trades down from their current slots in the first round of the 2021 NFL Draft. 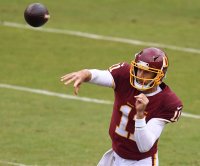