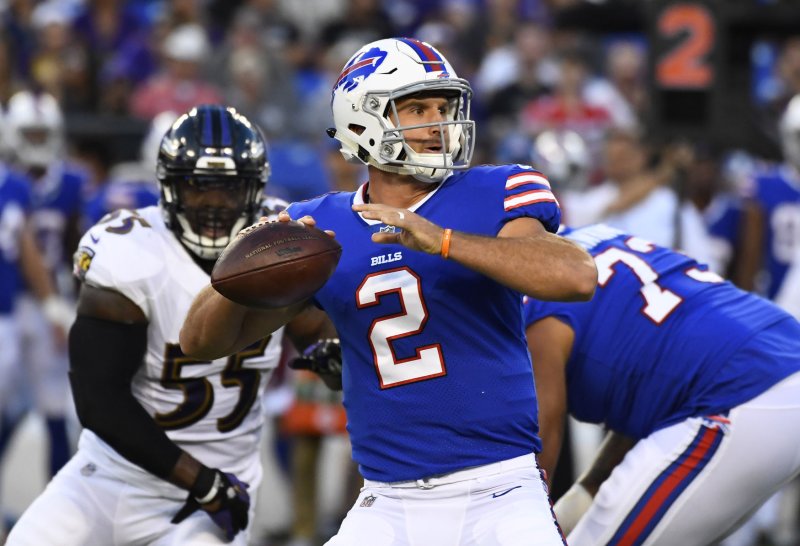 Nathan Peterman and the Buffalo Bills square off with the Los Angeles Chargers on Sunday. Photo by David Tulis/UPI | License Photo

SERIES HISTORY: 35th regular-season meeting. Chargers lead series, 22-10-2. The teams have also met three times in the playoffs and the Bills won the first two in 1964 and 1965, winning the AFL championship, the franchise's only two titles. The Chargers won the last meeting, 22-10 in 2014. Buffalo has not beaten the Chargers on the road since 1981, a 28-27 victory in San Diego.

KEYS TO THE GAME: In a surprise move, the Bills on Wednesday benched quarterback Tyrod Taylor and named rookie Nathan Peterman the starter. Several veterans seemed a bit tepid when told of the move, though they believe coach Sean McDermott is doing what he thinks is best and they quickly have bought into his process.

It seems likely the Bills will be a run-first team, as they normally try to be, but Peterman has shown an ability to make quick decisions and deliver the ball on time, so he could catch the Chargers off guard. They have very little meaningful tape to watch of him.

The offensive line is key to the Bills' chances, and it might again be without left tackle Cordy Glenn. Glenn sat out the Week 10 loss to the Saints with his never-ending foot and ankle problems. Chargers defensive ends Joey Bosa and Melvin Ingram could have a field day.

The Chargers have their own questions at quarterback. Philip Rivers' status wasn't certain on Wednesday. He has started 294 straight games, but suffered a concussion last week in a loss to the Jacksonville Jaguars. The 36-year-old was able to do some light work Wednesday; but, if he can't go, veteran Kellen Clemens will get the call.

To complicate Clemens' job, if he should start, is that the Chargers will face the Bills with an offensive line that is being patched together. Right tackle Joe Barksdale will miss another game with turf toe. Michael Schofield will start.

Rookie Danny Feeney will start at right guard, with Matt Slauson lost for the year before the bye. Spencer Pulley, who is nursing a sore knee, is holding up as a first-year starter at center. But it's not nearly the unit the Chargers thought they would have.

--Bills' offensive line vs. Chargers' pass rush. Veteran defensive coordinator Gus Bradley will have something cooked up for QB Nathan Peterman as he makes his NFL debut. You can bet somewhere in that scheme are Joey Bosa (9.5 sacks) and Melvin Ingram (8.5 sacks). Bradley has been moving them around, sometimes having them play on the same side or switch which direction they are coming from. The Bills have allowed 28 sacks, and those were with the more mobile Tyrod Taylor at QB.

--Chargers RB Melvin Gordon vs. Bills' defensive line. The Bills have been dominated up front the last two games as the Jets and Saints have combined to rush for 492 yards and nine touchdowns. Their front line, particularly the defensive tackle position, has been pushed out of the way far too easily, and Gordon could find some running lanes if that happens again. Buffalo replaced defensive tackle Jerel Worthy with DeAndre Coleman, whom it cut earlier in the season, in a move that gives them a little more bulk inside.

PLAYER SPOTLIGHT: Bills WR Jordan Matthews. Matthews has not provided what Buffalo thought he would when it traded cornerback Ronald Darby to acquire him and a second-round draft pick in August. Matthews had established himself as a solid No. 2 possession-type receiver in Philadelphia. But, with the Bills, he has battled injuries and a remedial passing offense. He was targeted just twice last week and had one catch for 14 yards. For the season, he has just 22 catches for 253 yards and a touchdown. That could change with a change at quarterback.

FAST FACTS: Bills RB LeSean McCoy had a career-high 114 yards receiving in his last game against the Chargers (2013 with the Eagles). He is one of four AFC running backs with 500 rushing yards and 250 receiving yards. ... New Bills WR Kelvin Benjamin has a touchdown catch in two of the past three games on the road. ... TE Nick O'Leary, golfing great Jack Nicklaus' grandson, had his first career touchdown catch last week. ... LB Preston Brown had 11 tackles in the last meeting with the Chargers and he is aiming for his fourth straight road game with at least eight tackles. ... S Jordan Poyer is the only NFL player with 50 tackles, two interceptions and two sacks. ... S Micah Hyde ranks second in the NFL with five interceptions. ... Chargers QB Philip Rivers threw two touchdown passes in Week 10 and has 4,005 career completions. He is the eighth quarterback with more than 4,000. ... RB Melvin Gordon has more than 130 total yards from scrimmage in three of the past five games. He has seven rushing touchdowns in the past 10 home games. ... RB Austin Ekeler is the only undrafted rookie running back in the common draft era with at least two TD catches in a game. ... WR Keenan Allen has at least 85 yards receiving in three of the past five home games. ... TE Hunter Henry has 10 receiving touchdowns since entering the league in 2016, most among AFC tight ends. ... DE Joey Bosa had a sack last week. He reached 20 career sacks in the fewest games (21) since the stat became official in 1982, and he is looking for a sack in his sixth straight game.

PREDICTION: Winning on the road is hard enough in the NFL, and even more challenging with a quarterback making his first career start. The Chargers might not have Philip Rivers, but Kellen Clemens has been around long enough that nothing should surprise him.