By
Jim Hoehn, The Sports Xchange 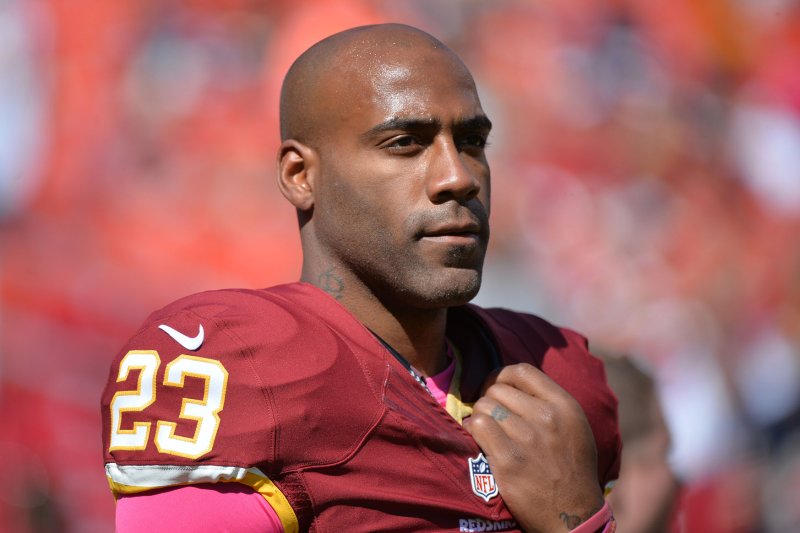 Washington Redskins safety DeAngelo Hall is seen at the start of the Redskins game against the Chicago Bears at FedEx Field in Landover, Maryland. File photo by Kevin Dietsch/UPI | License Photo

Hall, who sustained a season-ending knee injury in the third game of 2016, was activated off the physically unable to perform list on Friday.

The 33-year-old Hall not only saw significant action in the secondary on Sunday, he returned punts for the first time since 2012. He also broke up Russell Wilson's Hail Mary heave to Tanner McEvoy in the end zone on the final play to preserve the Redskins 17-14 victory over the Seattle Seahawks on Sunday.

"It feels good," said Hall, the NFL's active career interception leader. "It's been a while. I wouldn't want to play out that way again, just going from nothing to starting and returning punts, but I'm happy I got a chance to get out there and help my teammates come out with a win. A hard-fought game and it came down to the last play."

"It's a little different. I've always thought of myself as a pretty smart person, but I really didn't understand how important it was to physically get the reps, as opposed to just seeing it in the classroom," Hall said. "I'm like, man, this is a little bit different than I thought."

"Without him out there, there isn't any way I'm able to go out there and play," Hall said. "He put us in great position and we made plays and got off the field."

As for the punt returns, Hall wasn't exactly returning to a familiar role. He had one punt return in 2012 and two in 2009. His last semi-regular punt return role was with Atlanta in 2007.

"I hadn't returned punts since 2008, 2007? I definitely wasn't expecting that," Hall said. "We were a little banged up without having Crowder back there. I was the next-best option, I guess."

The Seahawks punted on their first possession and Hall was absolutely drilled by Seattle's Neiko Thorpe for no gain. He picked up seven yards on his only other return opportunity.

On the final play of the game from the Washington 46, Wilson heaved it deep into the end zone.

"I had to take it off somebody's hands," Hall said. "Everybody's like, 'Did you get the pick?' I'm like no, I'm just happy they didn't get the catch."

Despite Hall's long layoff, Washington head coach Jay Gruden had no reservations about his ability to contribute immediately.

"There is probably nobody I would rather have back there at the end of the game on a Hail Mary than D. Hall," Gruden said. "He has got great ball skills. He has a knack of being around the ball. ... it's great to have his leadership back there."