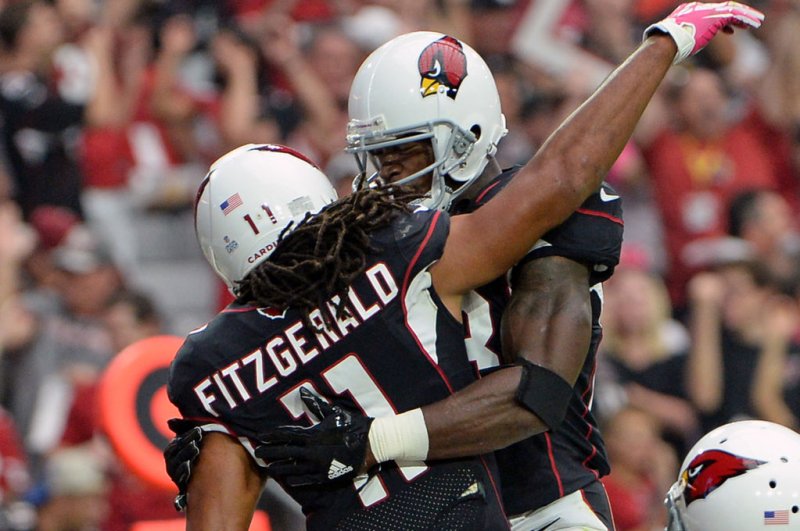 Arizona Cardinals' Larry Fitzgerald (L) is congratulated by Adrian Peterson after scoring on a touchdown in the second quarter against the Tampa Bay Buccaneers at University of Phoenix Stadium in Glendale, Arizona on October 15, 2017. File photo by Art Foxall/UPI | License Photo

SANTA CLARA, Calif. -- Adrian Peterson rushed for 159 yards on a career-high 37 carries to lead the Arizona Cardinals to a 20-10 victory over the San Francisco 49ers Sunday at Levi's Stadium.

Drew Stanton passed for 283 yards and two touchdowns in his first start of the season for Arizona.

The Cardinals (4-4) bounced back after a bye week from a 33-0 loss to the Los Angeles Rams in London. Starting quarterback Carson Palmer broke his left arm in that loss, and Stanton made his first start since Oct. 6, 2016, when he threw two touchdown passes in a 33-21 victory over the 49ers also at Levi's Stadium.

Stanton completed 23 of 48 passes with one interception.

Rookie quarterback C.J. Beathard completed 15 of 30 passes for 201 yards with one interception and ran for a touchdown in his third career start for the 49ers. Quarterback Jimmy Garoppolo, who was acquired by San Francisco on Oct. 30 from New England in a trade, suited up as Beathard's backup, but did not play.

Linebacker Karlos Dansby sealed the victory with an interception at Arizona's 7 with 2:28 left to play.

Peterson, who came to Arizona in a trade from New Orleans on Oct. 10, rushed for 79 yards on 17 carries in the first half when Stanton threw two touchdown passes and the Cardinals built a 14-3 lead.

Arizona capitalized on a 49ers turnover to strike first. Cardinals safety Tyrann Mathieu stripped the ball from fullback Kyle Juszczyk after a 7-yard catch, and cornerback Patrick Peterson recovered and returned it 47 yards to the 49ers' 6.

Three plays later, Stanton scrambled to his right and hit wide receiver Jaron Brown in the end zone, giving Arizona a 7-0 lead with 10:15 left in the first quarter.

San Francisco cut Arizona's lead to 7-3 on Robbie Gould's 42-yard field goal with 14:55 left in the first half.

The Cardinals answered with a 75-yard touchdown drive capped by Stanton's 11-yard touchdown pass to tight end Jermaine Gresham, who beat rookie cornerback Ahkello Witherspoon on a slant to make it 14-3 with 11:04 remaining.

Arizona had a chance to score again late in the first half, but on second-and-10 from the San Francisco 14, safety Eric Reid intercepted Stanton's pass intended for Gresham in the end zone.