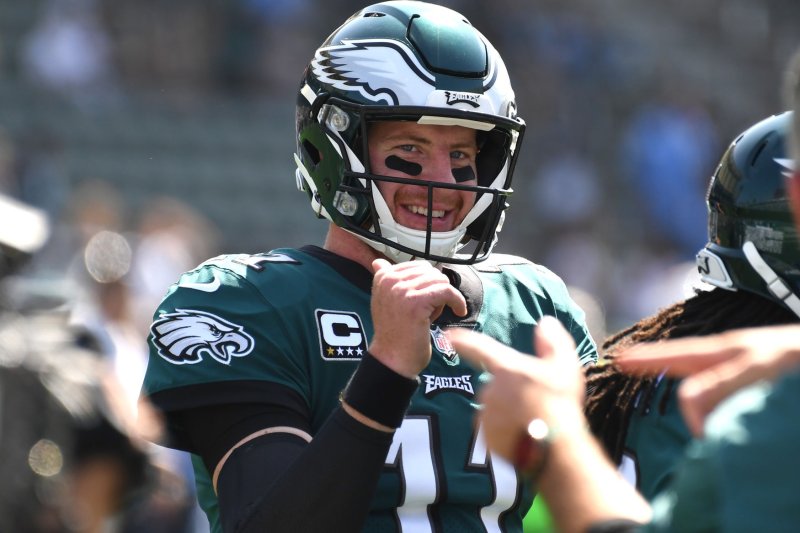 Carson Wentz and the Philadelphia Eagles take on the Denver Broncos this weekend. Photo by Jon SooHoo/UPI | License Photo

SERIES HISTORY: 13th regular-season meeting. Eagles lead series, 7-5. The Broncos have won three of the last four. The most historic meeting was on Dec. 14, 1975, when the Broncos defeated the Eagles 25-10 in Floyd Little's last game. Little was carried off the field after the contest.

KEYS TO THE GAME: After four defeats in which Trevor Siemian threw eight interceptions, Broncos coach Vance Joseph has replaced Siemian with Brock Osweiler, who is returning to the starting position he held with the Broncos for six games in 2015.

Osweiler's job is simple. "The saying is: 'Ball security is job security,'" he said. "If you protect the football, you're going to stay out there on the field."

The Broncos have outgained their opposition in every game this season, but they are 3-4 because of a minus-11 turnover margin.

The Eagles, who have the league's No. 1 run defense, want to shut down C.J. Anderson and the Broncos' ground game and force Osweiler to throw the ball.

The Eagles also made a big move this week, adding Jay Ajayi in a trade with Miami. He adds another dimension to a strong running attack bolstered by the power of LeGarrette Blount and QB Carson Wentz's scrambling threat.

Philadelphia's offense is potent and balanced, with Wentz hitting three players for 27 or more receptions halfway through the season. The Eagles will plan to add Ajayi to that mix and make it tougher on Denver.

The Broncos will try to contain the Eagles and hold them below their averages, as they have done with so many other offenses in recent years.

--Eagles QB Carson Wentz vs. Broncos rushers Von Miller, Shane Ray and Shaquil Barrett. Ray returned to the lineup last Monday and Barrett posted the Broncos' first strip-sack fumble at the expense of Alex Smith in that loss at Kansas City, so the group should be rounding into form just in time to face the sizzling second-year quarterback, who is tied for the NFL lead with 19 TD passes and ranks first in the NFC with 2,063 yards. The Broncos' success at mounting a potent pass rush against some of the league's best quarterbacks has fueled their defensive success in the last three seasons. The wrinkle they could throw in Sunday is a package that gets all three edge rushers onto the field at the same time, something they used to generate pressure on Smith in the loss at Arrowhead Stadium.

--Broncos RBs C.J. Anderson, Devontae Booker and Jamaal Charles vs. Eagles' front seven. A 177-yard rushing night got Denver's running game back on track after two subpar weeks, although the performance was marred by Charles' fumble in the first quarter. Booker has shown a burst in recent weeks, especially as a target in the passing game. The Eagles are allowing fewer rushing yards than anyone in the NFL, but that is also a function of playing in the lead; they've had fewer runs attempted against them than anyone else. The Eagles rank 12th in yards allowed per carry.

PLAYER SPOTLIGHT: Broncos QB Brock Osweiler. The last time Osweiler started for the Broncos, he was pulled in the third quarter for Peyton Manning after throwing two interceptions and losing a fumble in the 2015 season finale. Manning entered the game, and the Broncos rallied from a 13-7 deficit for a 27-20 win that clinched home-field advantage. Two months later, Osweiler signed with Houston in free agency, and the Broncos' succession plan went askew. Now Osweiler is back, humbled and wiser after his starting experience in Houston, an offseason in Cleveland and seven games as Trevor Siemian's backup. His top task? "Protect the football," he said. Look for Osweiler to play close to the vest, as he did during his first six starts as a Bronco, when he turned the football over just three times as the Broncos went 4-2.

FAST FACTS: Denver RB C.J. Anderson has 602 scrimmage yards and six TDS in the past seven vs. the NFC. ... WR Demaryius Thomas had 86 receiving yards and two TD catches in his only career meeting. In his past 10 games vs. NFC clubs, he has 894 yards and five TD catches. ... LB Von Miller has 8.5 sacks in his past nine games vs. the NFC. He has three sacks in his past three road games. Since entering the NFL in 2011, he has 80.5 sacks, most in the NFL. ... DE Derek Wolfe had a sack in the last meeting. He has three sacks in his past four games vs. NFC squads. ... Eagles QB Carson Wentz is tied for the NFL lead with 19 TD passes and ranks first in the NFC with 2,063 passing yards. His 19 TD passes are most in franchise history in the first eight games. He has 10 TDs and three INTs in his past three home games. ... RB LeGarrette Blount scored a rushing TD last week. The former Patriot has 10 rushing TDs in his past 11 games vs. AFC teams. ... TE Zach Ertz is tied for third in the NFL with six TD catches and leads NFC tight ends with 43 receptions and 528 yards. He has caught a TD pass in four straight games. ... CB Jalen Mills had a 37-yard interception for a TD last week, his first career TD. He leads the NFC with 10 pass breakups.

PREDICTION: It's a prototypical matchup of offense (Eagles) vs. defense (Broncos), but Osweiler's performance might be the biggest factor. It's hard to see him stopping the Eagles' six-game winning streak.