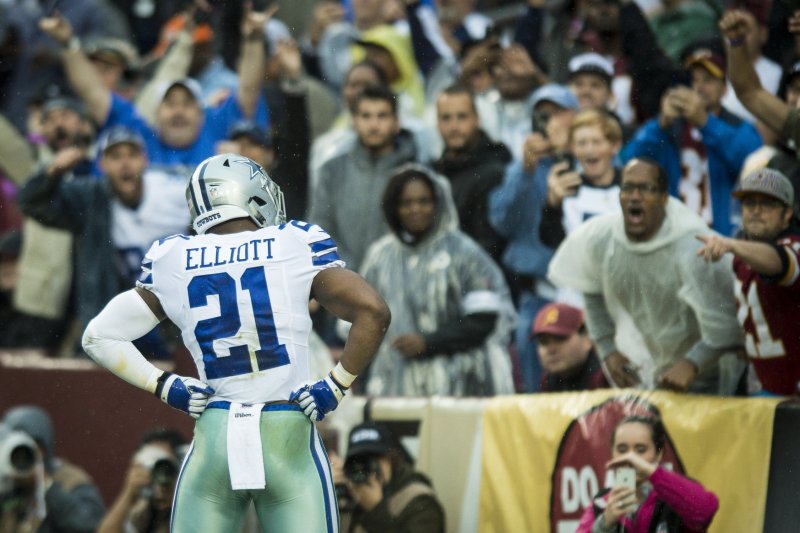 Dallas running back Ezekiel Elliott celebrates a touchdown during the first quarter against the Washington Redskings at FedEx Field on October 29, 2017 in Landover, Md. Dallas was leading at halftime 14-13. Photo by Pete Marovich/UPI | License Photo

The Cowboys picked up two first downs before punting with 1:05 left. Taking over on his 12, Cousins' second pass was intercepted by Byron Jones at the 21 and returned for a touchdown.

Elliott carried 33 times and scored on runs of 13 and 1 yards and had a 27-yard score negated by a holding penalty. He notched his third career performance of at least 150 yards in what could be his last game for some time. He has a court date on Monday that will likely determine whether he begins serving a six-game suspension immediately.

Washington, which began the game without three members of its offensive line, lost two more in the second half and watched two of its three tight ends, including Jordan Reed, leave with injuries.

Cousins completed 26 of 39 passes for 263 yards, one touchdown and one interception, and the Redskins (3-4) gained just 49 rushing yards on 15 carries. Wide receiver Jamison Crowder caught nine passes for 123 yards.

Trailing 14-13 at halftime, the Redskins lost two fumbles in the third quarter and Nugent -- signed earlier this week to fill in for the injured Dan Bailey -- followed each with a field goal.

Dallas took the lead for good late in the first half after cornerback Orlando Scandrick returned a blocked field goal 86 yards to set up an Elliott score.

On Washington's first possession of the second half, defensive end Tyrone Crawford sacked Cousins, whose fumble was recovered by defensive end DeMarcus Lawrence at the Washington 46. The Cowboys drove inside the 20 before they were forced to settle for Nugent's 36-yard field goal and a 17-13 lead.

On the ensuing kickoff return, Keith Smith's hit jarred the ball loose from Chris Thompson and Dallas was in business on the Washington 27. Elliott scored on the next play, but a hold by left tackle Tyron Smith negated the touchdown and the Cowboys soon again called on Nugent, who hit from 48 yards.

Nugent hit a field goal late in the quarter and another in the fourth. He missed his first attempt of the day in the second quarter.

Elliott's fumble on the game's first play from scrimmage resulted in an early 3-0 Washington lead.

Dallas answered with a five-play, 75-yard drive. Prescott connected with Terrance Williams for 25 yards to the Redskins 13, and Elliott went up the middle on the next play for his fifth touchdown of the season.

Washington quickly regained the lead. With a defender in his face, Cousins heaved the ball to Crowder, who caught it in stride before being tackled at the Dallas 4. Two plays later, Rob Kelley bulled in from the 1 and Washington led 10-7.

Leading 13-7 in the second quarter, the Redskins appeared ready to extend the margin when Rose attempted a 36-yard field goal. The kick was blocked by Crawford and Scandrick recovered at the 10 and, after briefly starting to his right, changed direction, got a few blocks and rumbled down the left sideline to the Washington 6-yard line.