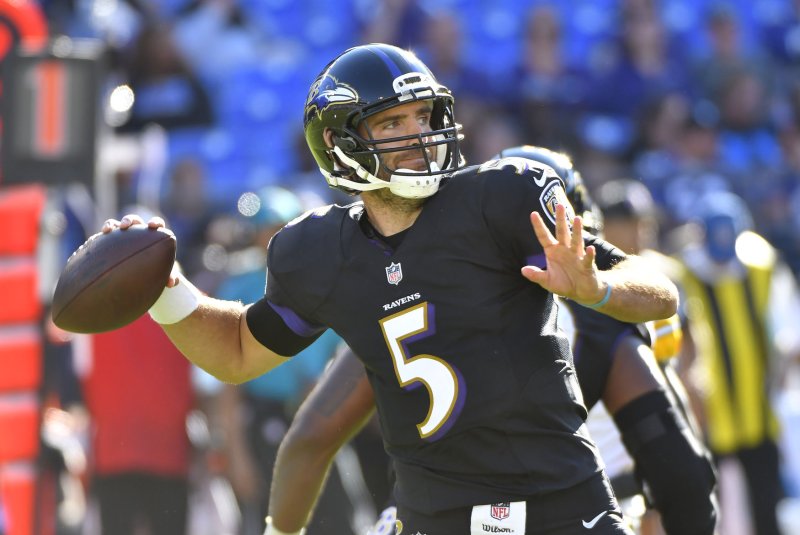 Flacco was injured on a hard hit by Miami linebacker Kiko Alonso after a 9-yard run late in the second quarter. Alonso was penalized for a personal foul and had his helmet knocked off by Baltimore center Ryan Jensen in retaliation.

After the play, Ravens coach John Harbaugh also got into a verbal altercation with Alonso and had to be held back by an official.

Backup Ryan Mallett entered and threw a 2-yard touchdown pass to Benjamin Watson, who beat Alonso on the play, to give Baltimore (4-4) a commanding 20-0 lead just before halftime.

Ravens running back Alex Collins had a career-high 113 yards on 18 carries against a Dolphins defense that entered the game ranked fifth against the run.

Baltimore linebacker C.J. Mosley returned an interception 63 yards for a touchdown for a 26-0 lead with 14:16 left in the game.

Frustration boiled over for the Dolphins (4-3) with 6:59 remaining when defensive end William Hayes was flagged for another unnecessary roughness penalty. Miami defensive tackle Ndamukong Suh also appeared to grab Mallett by the neck.

Ravens running back Javorius "Buck" Allen fumbled on the next play, but receiver Chris Moore recovered in the end zone and Baltimore led 33-0.

Jimmy Smith capped a stellar day by the Baltimore defense with a 50-yard interception return for a touchdown that rounded out the scoring.

It was the largest shutout margin in Ravens history.

Dolphins quarterback Matt Moore, who was making his first start of the season for the injured Jay Cutler, struggled much of the night, going 25 for 44 for 176 yards with two interceptions. He had a 47.1 passer rating.

The Ravens took a 7-0 lead on a 35-yard touchdown pass from Flacco to Jeremy Maclin with 8:19 left in the opening quarter. Miami appeared to be caught off-guard with Baltimore's no-huddle and was flagged for 12 players on the field.

Justin Tucker boosted the lead early in the second quarter with a pair of field goals from 55 and 48 yards. Mallett's touchdown pass to Watson with 1:56 remaining gave Baltimore a 20-0 cushion at the break.

Miami running back Jay Ajayi had a 21-yard scamper on his first carry, and then managed just 3 total yards on his next nine attempts. Overall, the Dolphins were held to 87 yards in the first half.

NOTES: The Ravens' passing game got a boost when WRs Breshad Perriman (concussion) and Jeremy Maclin (shoulder) were able to play. However, WR Mike Wallace (concussion) missed just the second game of his nine-year career. Baltimore had only four healthy receivers. ... Dolphins DE Andre Branch was inactive due to a groin injury. As a result, Charles Harris, Miami's first-round pick from Missouri, got his first NFL start in Branch's spot. ... Ravens TE Benjamin Watson (knee) was in the lineup despite missing the past two practices. On Monday, Baltimore signed TE Gavin Escobar, a former second-round pick by the Cowboys, for added depth and he was also active. ... Miami WR DeVante Parker (ankle) was ruled out for third straight week even though he was able to practice Tuesday. Despite the missed time, Parker began the night third on the team with 19 receptions for 236 yards with a touchdown.