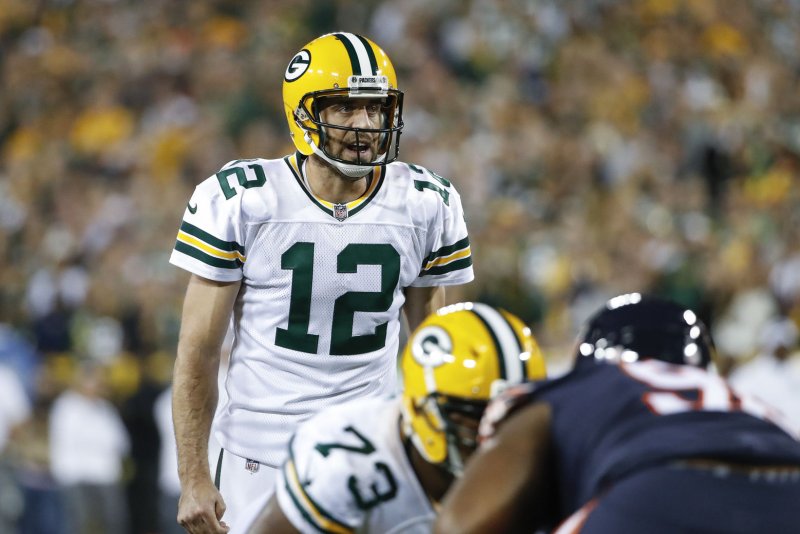 Green Bay Packers quarterback Aaron Rodgers (12) directs his team against the Chicago Bears during the first half on September 28 at Lambeau Field in Green Bay, Wisc. Photo by Kamil Krzaczynski/UPI | License Photo

With Matt Ryan, Drew Brees and Kirk Cousins on byes this week, you will likely see several free agency moves in your fantasy football league. If you don't have a backup option ready on your bench, or your primary passer doesn't have a great matchup, check out our add/drop article for Week 5.

Tom Brady is my No. 2 quarterback for Week 5 with a matchup against the Tampa Bay Buccaneers. I expected Brady and the New England Patriots to light up Raymond James Stadium against a defense allowing the third-most fantasy points per game to opposing quarterbacks. "Terrific Tom" is also scorching. He has 10 touchdowns and zero interceptions in his last three games. He also has thrown for at least 300 yards in each of those contests.

Tampa Bay Buccaneers quarterback Jameis Winston is on the other end of that matchup. He is my No. 3 quarterback for Week 5 as he faces a struggling Patriots secondary. Winston is coming off his best game of the season, when he threw for 332 yards, three scores and no interceptions against the New York Giants. The Patriots are allowing the most fantasy points per game, passing yards and touchdown passes to opposing gunslingers.

Los Angeles Chargers veteran Philip Rivers is also a QB1 this week with a matchup against those Giants. Rivers comes in as my No. 8 quarterback for Week 5 as he faces a defense allowing the eighth-most fantasy points per game and fifth-most passing scores per game to opposing passers.

Game-winning grab for Fitz and now he's nominated for @Castrol Edge Clutch Performer of the Week.

Arizona Cardinals quarterback Carson Palmer is a fringe starter in 12-team leagues this weekend. He is my No. 13 passer with a road matchup against the Philadelphia Eagles. The Eagles are tied with the Dallas Cowboys for allowing the ninth-most fantasy points per game to opposing quarterbacks. Philadelphia has also allowed the second-most passing yards (1,204) to opposing passers this season. Palmer is an adequate bye week fill-in. Palmer has thrown for at least 325 passing yards in three consecutive starts heading into this weekend.

Indianapolis Colts quarterback Jacoby Brissett has done a fine job filling in for Andrew Luck so far this season. This week he is my No. 18 quarterback against the San Francisco 49ers. San Francisco is one of 12 teams to have allowed at least 1,000 passing yards this season. Brissett likely isn't a starter for your squad this week, but you could do worse. He is getting back center Ryan Kelly and has the talent to add fantasy points with his legs.

Baltimore Ravens quarterback Joe Flacco is another risky play but should be considered because of a decent matchup. The Oakland Raiders might have trouble moving the ball in this contest after losing quarterback Derek Carr to a multiple-week injury. That means more time of possession for Flacco and the Ravens. Flacco has been somewhat unimpressive early in the season, but a matchup against this defense could cure that. The Raiders are allowing the sixth-most fantasy points per game to opposing passers this season. Oakland also has not intercepted a single pass. Flacco comes in at No. 20 for me in this matchup.

NFL // 1 week ago
2022 NFL schedule release: Bills-Rams to kick off season; Broncos-Seahawks on 'MNF'
May 12 (UPI) -- The NFL will open its 2022 regular season inside Los Angeles' SoFi Stadium, as the defending Super Bowl champion Rams will host the Buffalo Bills on Thursday, Sept. 8.
Advertisement