Chicago Bears' quarterback Mitchell Trubisky warms up before the start of the Bears-Arizona Cardinals game at the University of Phoenix Stadium in Glendale, Arizona, on August 19, 2017. File photo by Art Foxall/UPI | License Photo

Chicago Bears quarterback Mike Glennon (8) looks to pass the ball against the Green Bay Packers during the second half at Lambeau Field in Green Bay on September 28, 2017. The Packers defeated the Bears 35-14. Photo by Kamil Krzaczynski/UPI | License Photo

The Chicago Bears plan to make a change at quarterback and start rookie Mitchell Trubisky for next Monday night's game against the Minnesota Vikings.

The quarterback change has been expected after Glennon turned over the ball four times in the 35-14 loss last Thursday night at the Green Bay Packers.

Glennon was 21 of 33 for 216 yards and one touchdown with two interceptions and two lost fumbles against the Packers.

The Bears had maintained that Glennon, signed in March to a three-year, $45-million deal with $18.5 million guaranteed, gave them their best chance to win.

"I think, as I've referenced, the quarterback gets a lot more credit and a lot more blame than they deserve," Fox said after last weeks' loss. "We're looking at everything and we're not in a big rush to do anything about it because we don't have a game until next Monday night."

The Bears traded up one spot to select Trubisky out of North Carolina in the draft in April.

In the past, Fox and general manager Ryan Pace said they preferred Trubisky be a backup this season.

During preseason, Trubisky seemed to light a fire under the offense with his mobility. But Fox said there's no way to know if Trubisky is ready to play.

"Until that happens, you don't really know," Fox said. "I don't think you (media) know and I don't even know. Regardless, it's who you draft, who you sign to a free-agent contract. I think that kind of tells what you think. Now you still have got to execute."

Trubisky won the Bears' backup job in Week 1, beating out veteran Mark Sanchez, who has been inactive the first four weeks. Trubisky was impressive in the preseason when he passed for 364 yards, three touchdowns and no interceptions for a 106.2 passer rating.

The 23-year-old Trubisky will become the third quarterback selected in the 2017 draft to start this season as he joins the Houston Texans' Deshaun Watson and the Cleveland Browns' DeShone Kizer. 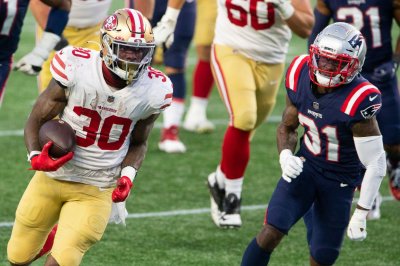