DENVER -- Broncos safety Justin Simmons stopped a last-ditch Oakland drive with an interception, and Denver hung on to beat the Raiders 16-10 Sunday in a game that saw Raiders quarterback Derek Carr forced out because of an injury.

Simmons outjumped Amari Cooper for the pass from backup quarterback EJ Manuel in the final moments to thwart the drive and Broncos quarterback Trevor Siemian then took a knee twice to run out the clock.

Siemian completed 16 of 26 throws for 179 yards including a 22-yard touchdown pass to tight end A.J. Derby.

Brandon McManus made three of his four field-goal tries for the Broncos (3-1). Oakland fell to 2-2, losing its second in a row.

Carr, who went 10 of 18 for 143 yards and a touchdown before being injured, was sidelined late in the third quarter after being knocked down on a sack.

Defensive end Shelby Harris hit Carr and the Raiders quarterback was going down when defensive end Adam Gotsis flew in and wrapped a padded arm between his helmet and shoulder pads and pulled him the rest of the way to the ground.

Carr lay on the turf for a few minutes as trainers and medical personnel came on the field to assist him. He eventually was able to get up and walk off the field on his own power.

He was replaced in the game by Manuel.

With Manuel leading a drive, the Raiders drove to a field goal, pulling within 16-10 with 5:23 left to play. Giorgio Tavecchio connected from 38 yards out.

The Broncos missed a chance to add to their lead when McManus, who made three field goals earlier, had a 29-yard attempt early in the fourth hit the left upright and bounce away.

On a fourth-and-11 play from their own 33, the Raiders tried a fake punt but the Broncos outside contain man, Jordan Taylor, came in to tackle punter Marquette King for a 3-yard loss.

An unsportsmanlike conduct penalty against King for throwing the ball at a Broncos player allowed the Broncos to take over at the 15, but the Broncos could make little headway and settled for the field-goal try that went awry.

Denver stretched its lead to 16-7 on a pair of third-quarter field goals by McManus covering 36 and 46 yards. Running back C.J. Anderson broke loose on a 40-yard run to help set up the 36-yarder.

The Raiders pulled to within 10-7 at halftime behind Carr's deep ball to Johnny Holton, who ran by safety Darian Stewart to gather in the pass for Oakland's first score.

Denver got a 28-yard field goal from McManus after a first-quarter drive stalled at the Oakland 10 on a third-down incompletion.

Derby's first career touchdown catch was eye-popping. He found a hole in the Raiders' zone and Siemian lofted a pass that Derby latched onto with one hand, tip-toeing down the sideline for the final few yards to stay in bounds before extending his arm and the ball over the goal line for the score. 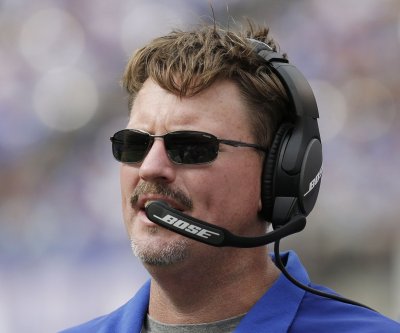