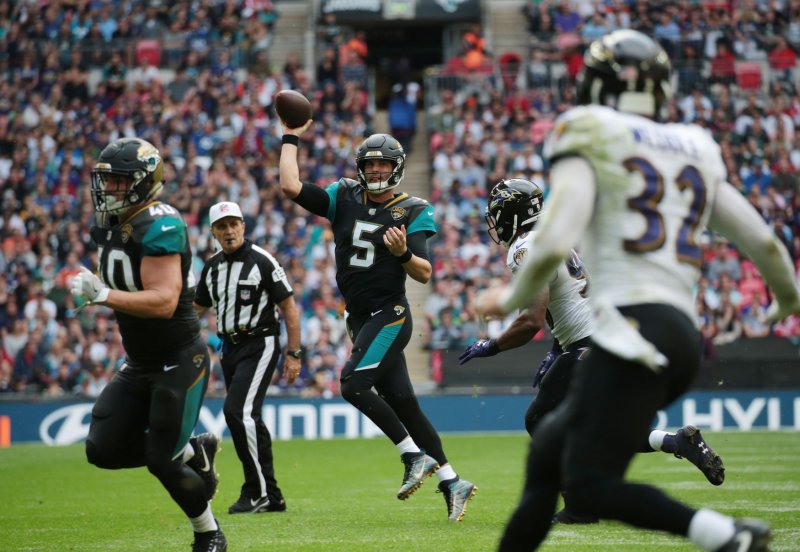 SERIES HISTORY: 12th regular-season meeting. Jaguars lead series, 6-5. The Jets have won the last three meetings, with the last coming in Week 9 of the 2015 season at MetLife Stadium, a 28-23 decision in which Chris Ivory, now a member of the Jaguars, rushed for two touchdowns and Ryan Fitzpatrick threw for two more. The teams have met in the playoffs once, in the 1998 AFC divisional round, as Bill Parcells guided the Jets to a 34-24 win at Giants Stadium. Curtis Martin had 182 yards from scrimmage and two touchdowns, while Keyshawn Johnson caught a touchdown pass from Vinny Testaverde and ran for another score. Three of the Jaguars' six wins in the series have been by four points or less or in overtime.

KEYS TO THE GAME: Jaguars quarterback Blake Bortles played one of the best games of his career last week in the rout of Baltimore with 244 yards passing and four touchdowns with no interceptions. He may have an even bigger role against a Jets defense that has been fairly efficient in shutting down running attacks as evidenced by its performance a week ago when it held Miami to 30 yards on the ground. If the Jets stack the line to shut down rookie Leonard Fournette as the Ravens did last week, Bortles will need to take advantage and get the ball to his receivers, who should have one-on-one coverage.

Jets quarterback Josh McCown hasn't thrown an interception the last two weeks, and that will have to continue for New York to be successful against a ball-hawking Jaguars defense that has at least one interception in each of its first three games, and eight takeaways overall. The Jets do not have an established No. 1 receiver, which could be a problem for McCown in throwing against the Jaguars solid cornerback tandem of Jalen Ramsey and A.J. Bouye.

With Jets running back Matt Forte likely to miss the game with an injury, all signs point to a low score from New York.

--Jets QB Josh McCown vs. Jaguars CBs Jalen Ramsey and A.J. Bouye. McCown is off to a hot start with the Jets, completing 69.8 percent of his passes, the third-best mark in the AFC. But he averages less than 28 passes a game, resulting in just 200 yards a contest through the air. He'll be challenged by Ramsey and Bouye who form one of the best cornerback tandems in the NFL. In man coverage this season, Ramsey and Bouye have allowed 11 completions in 30 attempts for 151 yards and just one score in three games. Bouye is holding quarterbacks to a 37.5 rating, Ramsey just a shade higher at 38.4. Those kind of numbers will make it difficult for any quarterback to have passing success against the Jaguars secondary.

--Jaguars RB Leonard Fournette vs. Jets LB Demario Davis. After hitting the 100-yard mark in his season debut against Houston, Fournette has been held to 40 and 59 yards the last two weeks. The 199 yards is still the third-highest total by an AFC back after three games. Fournette has also had a handful of runs that resulted in double-digit gains that have been nullified by penalties. Davis is second in the league with 32 tackles and roams from side to side in stopping running plays. He has shown good play recognition and with his athleticism has the ability to avoid guards and centers paving the way for their running back.

PLAYER SPOTLIGHT: Tight end Marcedes Lewis. The 12-year veteran had become a forgotten weapon in recent years before he came through with four catches for 64 yards and three touchdowns last week against Baltimore. In each of the last three seasons, Lewis had just one game each year in which he caught as many as four passes. The 64 receiving yards are the most since 2014 when he had a 63-yard reception and 8-yard catch for 71 receiving yards. He had two TD catches in four games in 156 previous NFL games, three of which came in 2010. Lewis suddenly becomes a weapon that opposing defenses will now have to play close attention to, especially when the Jaguars get into the red zone.

FAST FACTS: Jaguars QB Blake Bortles passed for 4 TDs and had a 128.2 rating last week. He has 4 career games with 4-plus TD passes. He had 381 passing yards with two TDs in the last meeting with the Jets. Jags rookie RB Leonard Fournette has rushed for a TD in each of his first three career games. RB Chris Ivory had 18 TDs (16 rush, 2 rec.) in three seasons with the Jets (2013-15). The Jaguars lead the NFL with 13 sacks. DE Calais Campbell ranks third in the NFL with 4.5 sacks... Jets QB Josh McCown completed 18 of 23 (78.3 pct.) for 249 yards with a TD for a 126.3 rating last week. He aims for his third straight week with 110-plus rating. LB Demario Davis led the team with 12 tackles and had three tackles for loss last week. He has a team-high 32 tackles, tied for second most in the NFL.

PREDICTION: The Jekyl-and-Hyde Jaguars were dominant in both of their wins but were horrible in their lone loss. They can't afford to lay an egg against a very beatable Jets team.