Numerous New England Patriots players take a knee during the national anthem prior to the game against the Houston Texans Sunday at Gillette Stadium in Foxborough, Mass. Photo by Matthew Healey/UPI | License Photo

Sept. 25 (UPI) -- The NFL aired a commercial about unity as players, coaches and owners locked arms, knelt or sat out the national anthem on the sidelines of Sunday's games.

Inside These Lines aired before the 1 p.m. games online and was shown on TV during Sunday Night Football.

The commercial features a man painting the lines on a football field and several displays of players helping each other up before showing players locking arms. It also features Pat Tillman.

The ad wraps up by showing a giant outline of the United States painted on a football field.

The protests were a stand of unity against comments made by President Donald Trump saying that NFL players who refused to stand for the national anthem should be fired or suspended.

Inside these lines, we can bring out the best in each other and live united. pic.twitter.com/nQpUrKFL4T

"Inside these lines, it's a game of inches, and there's no such thing as an easy yard when you're fighting to move forward.

"Inside these lines, we're not only defined by our victories, but by the way we handle our defeats.

Trump continued to tweet about the protests throughout the day Sunday and Monday morning.

"Sports fans should never condone players that do not stand proud for their National Anthem or their Country," Trump wrote. "NFL should change policy!" 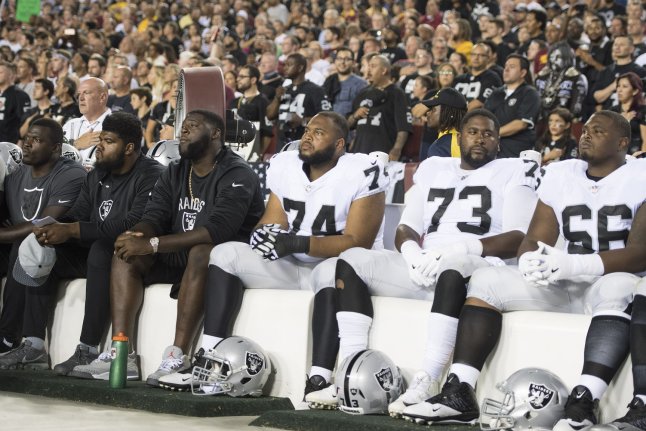 Members of the Oakland Raiders' remain seated during the national anthem before their game against the Washington Redskins on Sunday at FedEx Field in Landover, Md. Photo by Kevin Dietsch/UPI

"Many people booed the players who kneeled yesterday (which was a small percentage of total)," Trump said Monday morning. "These are fans who demand respect for our Flag!"

"The issue of kneeling has nothing to do with race," Trump tweeted Monday. "It is about respect for our Country, Flag and National Anthem. NFL must respect this!"

Former San Francisco 49ers quarterback Colin Kaepernick began the national anthem protests during the 2016 preseason. He sat on the 49ers' bench on Aug. 26 before a game against the Green Bay Packers. 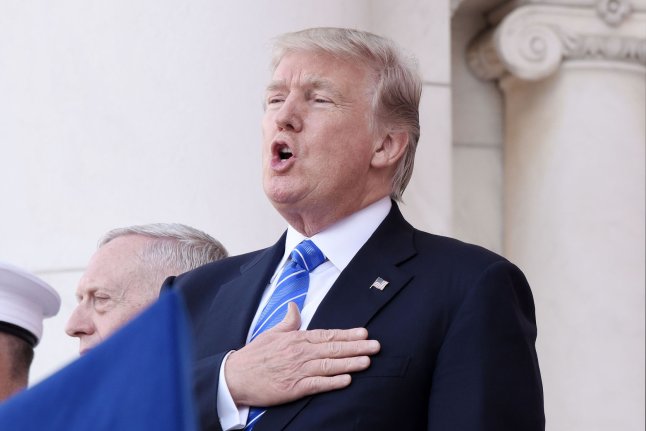 President Donald Trump sings the national anthem as he participates in a wreath-laying ceremony at the Tomb of the Unknown Soldier on May 29 at Arlington National Cemetery in Arlington, Va. Pool Photo by Olivier Douliery/UPI

The quarterback explained that his protests were based on police brutality and racial inequality. He opted out of the final year of his contract with the team this offseason and remains a free agent.

NFL commissioner Roger Goodell tweeted that the commercial "reflects the unifying force of our great game, our players and clubs."

NFL // 4 days ago
FCC proposes $504,000 fine for Fox TV over fake emergency alert
Jan. 24 (UPI) -- A video promotion aired before a game between the New York Giants and Philadelphia Eagles on the Fox TV network in 2021 violated federal rules about mimicking an emergency alert, the FCC said Tuesday in proposing a $504,

NFL // 6 days ago
McCaffrey, 49ers slip by 'disappointed' Cowboys, advance to NFC title game
Jan. 23 (UPI) -- Christian McCaffrey scored on a go-ahead touchdown run at the start of the fourth quarter to give the San Francisco 49ers their final edge in a victory over the Dallas Cowboys, clinching a spot in the NFC title game.

NFL // 6 days ago
Damar Hamlin attends Buffalo's playoff game against Cincinnati
Jan. 22 (UPI) -- Buffalo Bills safety Damar Hamlin made his first public appearance on Sunday, joining his team in the locker room ahead of its Divisional Round game against the Cincinnati Bengals at Highmark Stadium in Orchard Park, N.Y