The Miami Dolphins star is a true bell cow and will be featured for his team all season long. But that is rare to see in today's NFL, when teams are opting to employ the running back by committee philosophy.

With several running backs either being lost to injury or nursing ailments already through two weeks, some dynamic backup threats are now at the forefront. That should lead to some tricky decisions for your lineup.

If you don't have great options on your bench, check out our add/drop article for Week 3.

Jay Ajayi had 30 touches for 126 yards in the Dolphins' Week 2 win against the Los Angeles Chargers. He has another great matchup in Week 3 against the winless New York Jets. His workload and the opponent make him my No. 1 running back option this week. The Jets have allowed the second-most fantasy points and yards to opposing running backs through two games. New York is tied for allowing the most rushing touchdowns (3) to opposing running backs this season. The Jets have been torched on the ground, giving up 180 rushing yards and three scores to the Oakland Raiders in Week 2 and 159 yards from scrimmage on 27 touches in Week 1 to LeSean McCoy. Expect more of the same on Sunday afternoon.

Kansas City Chiefs running back Kareem Hunt is the steal of the season so far in fantasy football, based on his draft position and productivity. This week he gets the Los Angeles Chargers, a team just torched by Ajayi. The Chargers haven't been terrible against the run overall, but I am going with the talent to make this decision. Hunt already has 355 yards from scrimmage and five touchdowns on 38 touches. He is my No. 4 running back this week.

Another pleasant surprise this year has been the play of Green Bay Packers running back Ty Montgomery. The third-year playmaker uses his dynamic skillset to churn up yards in a variety of ways. In Week 1 against the Seattle Seahawks he plowed for 93 yards from scrimmage and a score. Last week against the Atlanta Falcons he piled up 110 yards from scrimmage and two scores on 16 touches. The Packers host the Cincinnati Bengals this week. Cincinnati has seen the most rushing attempts by opposing running backs through two weeks (71) and has allowed the second-most yards to opposing rushers (240). With the Bengals defense likely concentrating on Aaron Rodgers and the passing game, expect Montgomery to find enough room for RB1 production.

San Francisco 49ers running back Carlos Hyde always flies under the radar. Despite his team's 0-2 record, Hyde has maintained steady production. He had 220 yards from scrimmage in two games against the Carolina Panthers and Seattle Seahawks. On Thursday, the 49ers get the Los Angeles Rams, a team that has allowed the fifth-most fantasy points this season to opposing running backs. Hyde is a low-end RB1 for me this week due to workload and the opponent.

Javorius Allen is a long shot for me in Week 3 due to the opportunity he has ahead. You likely stashed him earlier this season or won him off of waivers. If you need to use him this week, don't expect a huge day, but he could close in on at least 75 yards from scrimmage. He will be relied upon in the passing game and should fine some room to move against the Jacksonville Jaguars on Sunday morning in London. Allen saw a big workload last Sunday, churning up 103 yards on 19 touches against the Cleveland Browns. Jacksonville held Lamar Miller to 65 rushing yards in Week 1 but conceded 92 yards and a score to Derrick Henry in Week 2. Allen can be used as an RB2 or flex play in deeper leagues.

Tennessee Titans running back Derrick Henry could be valuable even if DeMarco Murray plays, but if he doesn't, Henry's value shoots up. The Titans host the Seattle Seahawks on Sunday. Seattle has been carved up by the likes of Hyde and Montgomery already this season. If Murray is out, Henry is a must-start RB2. 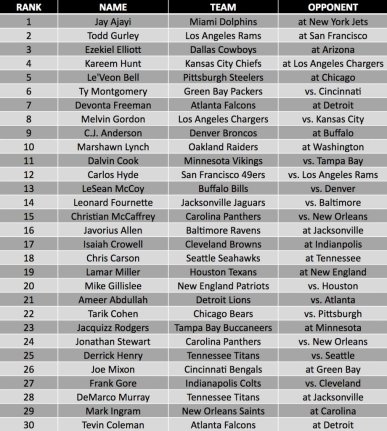 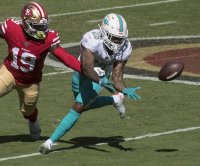