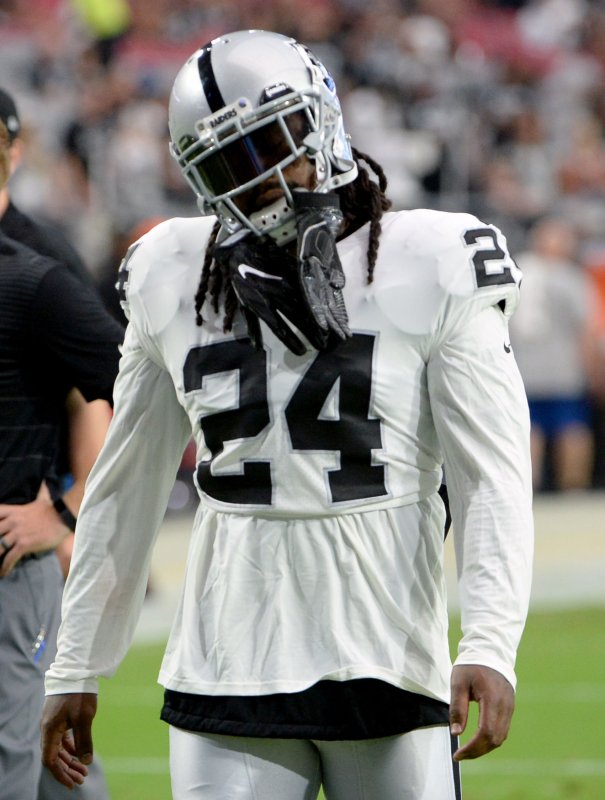 Marshawn Lynch and the Oakland Raiders sqaure off with the New York Jets on Sunday. Photo by Art Foxall/UPI | License Photo

SERIES HISTORY: 42nd regular-season meeting. Raiders lead series, 22-17-2. The teams are 2-2 against each other in the postseason, with the last playoff game coming in the 2003 divisional round, a 30-10 Oakland win in which Jerry Rice caught a touchdown pass for the Raiders. The most famous game between the teams was the "Heidi" game in 1968, when NBC left the game to broadcast the kids' movie (the Raiders won the game, but the Jets got revenge in the playoffs a month later). The last meeting came two seasons ago, when Oakland won 34-20 behind 333 yards and four touchdown passes from quarterback Derek Carr.

KEYS TO THE GAME: For the Jets to have any shot at moving the ball effectively, they'll need to hit their tight ends for some easy first downs. With Eric Tomlinson (concussion) banged up, that job may again fall to Will Tye, who had three catches for 34 yards on Sunday, only one week after he was cut by the Giants. The Raiders allowed seven catches for 76 yards to Titans tight end Delanie Walker, but he is one of the top tight ends in the NFL.

Defensively, the Jets are going to have their hands full. Carr, running back Marshawn Lynch and receivers Amari Cooper and Michael Crabtree are some of the best skill position players in the business. New kicker Giorgio Tavecchio was a revelation last week, making all four of his field goals, including two from 52 yards.

Despite his team being favored by almost two TDs, Raiders coach Jack Del Rio is not dismissing the Jets.

"They probably have one of the better (defensive) fronts in the league," Del Rio said. "It's one of the best we'll face. They're aggressive in their scheme. The two safeties they drafted are good players.

"Our motto is basically to respect every opponent, but fear nobody," Del Rio said. "I got asked by the New York media about their team and the (point) spread. Those things mean nothing to us. It's about playing the game. It's about understanding the challenges that you face. That's what we're about."

--Jets WR ArDarius Stewart vs. Raiders CB Gareon Conley. Conley missed last week's game because of a shin injury, but the first-round pick out of Ohio State is likely to make his NFL debut this week and could see action against fellow rookie Stewart, who caught two passes for 10 yards in the opener.

--Raiders RT Marshall Newhouse and RG Gabe Jackson vs. Jets LE Leonard Williams. Newhouse is listed as the No. 1 left tackle after being co-No. 1 a week ago with Vadal Alexander. He played solidly against Tennessee while Alexander relinquished a sack. He'll have a difficult challenge in Williams, the Jets' most talented lineman and a player the Raiders carefully considered in the draft before opting for Amari Cooper. When Newhouse is working against the outside rush of linebacker Jordan Jenkins, Jackson will have some duty guarding Williams. The fourth-year guard earned a five-year, $56 million deal in the offseason and is a foundation player for the Raiders.

PLAYER SPOTLIGHT: Jets RBs Matt Forte and Bilal Powell. The Jets' duo ran for a woeful 38 yards on 13 carries against the Buffalo Bills. Most would say the Tennessee Titans' tandem of DeMarco Murray and Derrick Henry is more explosive than Forte and Powell, but Murray and Henry managed just 69 yards on 18 carries in their loss to the Raiders. And with the Oakland crowd likely to be at full pitch for Sunday's home opener, don't expect many, if any, big plays from the Jets' ground attack.

FAST FACTS: Jets QB Josh McCown started nine games for Oakland in 2007. He threw for 341 yards and two touchdowns in his last start vs. Oakland (2015 with Cleveland). ... Oakland QB Derek Carr passed for 262 yards and two TDs in Week 1. In two starts vs. the Jets, he has six TD passes and no INTs, with a 113.8 rating. He threw for 333 yards and four TDs in the last meeting. ... In his return to the NFL last week, Oakland RB Marshawn Lynch tallied 92 scrimmage yards (76 rushing). He has 74 rushing TDs since entering league in 2007, second most in the NFL. ... DE Khalil Mack had a sack and three tackles for loss in the last meeting. He leads the NFL with 26 sacks since 2015.

PREDICTION: The Raiders are huge favorites for a reason. This might get ugly.