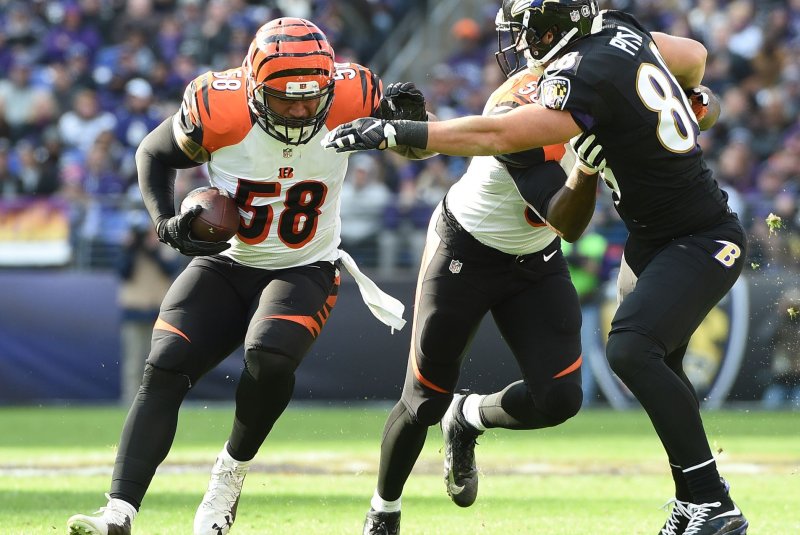 Cincinnati Bengals linebacker Rey Maualuga (58) intercepts a pass from Baltimore Ravens quarterback Joe Flacco for a nine yard return during the first half of their NFL game on November 27 at M&T Bank Stadium in Baltimore, Md. File photo by David Tulis/UPI | License Photo

Aug. 19 (UPI) -- The Miami Dolphins have signed linebacker Rey Maualuga, according to sources.

NFL Network reported the deal for the linebacker on Saturday afternoon.

The veteran linebacker also posted a photo of himself on Snapchat. He was wearing a Dolphins hat and shirt in the photo.

Maualuga, 30, was a second round pick by the Cincinnati Bengals in the 2009 NFL Draft. He spent eight seasons in Cincinnati, registering 23 passes defended, seven interceptions, six forced fumbles, four sacks, three fumble recoveries and nearly 600 tackles. The USC product had 104 starts for the Bengals.

Miami made the move after losing second round pick Raekown McMillan to a torn ACL in its first preseason game, McMillan was expected to start at middle linebacker. Maualuga had 27 tackles in 14 games last season, starting six contests for the Bengals.

He has a relationship with Dolphins defensive coordinator Matt Burke, who was his linebackers coach from 2014 to 2015 in Cincinnati.

Maualuga worked out for the Dolphins last week. The Dolphins also have Mike Hull and Chase Allen at the position. Hull started at middle linebacker in the Dolphins' preseason loss Thursday to the Baltimore Ravens.

Maualuga's deal includes $900,000 in base salary, according to the Miami Herald.