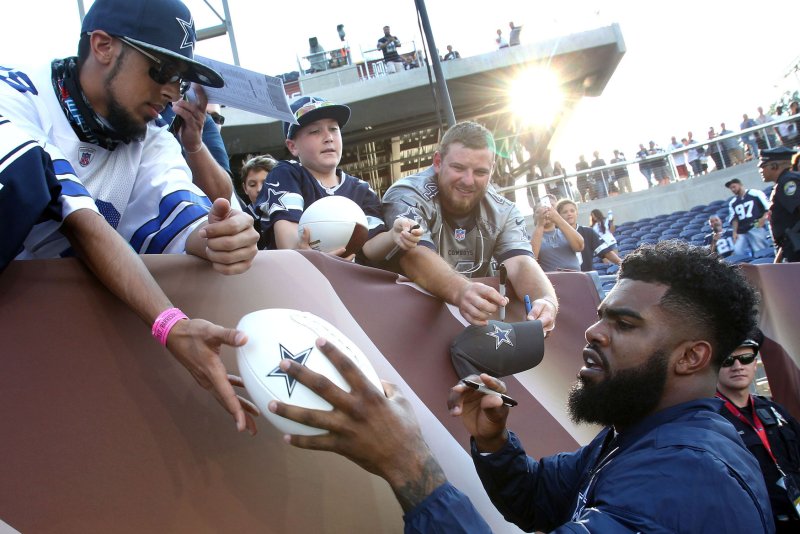 Dallas Cowboy Ezekiel Elliott signs autographs prior to the Cowboys game against the Arizona Cardinals in the Pro Football Hall of Fame Game at Tom Benson Hall of Fame Stadium in Canton OH August 3, 2017. Photo by Aaron Josefczyk/UPI | License Photo

The Dallas Cowboys support Ezekiel Elliott but the team is prepared to play without their star running back due to his six-game suspension by the NFL for violating the league's personal conduct policy after multiple domestic violence incidents.

Coach Jason Garrett told reporters following Saturday night's 13-10 preseason loss to the Rams at the Memorial Coliseum in Los Angeles that the Cowboys will be ready for the start of the regular season.

"Obviously, Zeke Elliott's a good football player," Garrett said. "But we feel like we've built our team the right way and we feel like we have some veteran experience, guys that have been productive in this league at the running back position in Alfred Morris and Darren McFadden. (We) feel good about Rod Smith, and we're going to focus on the guys that we have available to us. Zeke will be with us practicing as we go forward and he's going to get himself ready to play when the time comes.

"We talked to our team about the situation and the importance of focusing on what we can control. We can't control what the NFL does. It's not my place to comment on whether I think it's justified.

"Obviously we know this was something that could happen," Jones said of Elliott's suspension on 105.3 The Fan in Dallas. "We knew that the investigation was ongoing, and whenever you prepare for a football team you prepare for injury. You prepare for things that are unexpected. And certainly we have done that and are comfortable with who we are on this football team.

"At the end of the day we certainly support Zeke. At the same time we understand the very, very, very serious nature of domestic violence, certainly that people should be held accountable if that takes place."

Elliott's six-game ban to start the regular season is the penalty for first-time offenders of the league's new domestic violence policy. Elliott was notified by the NFL on Friday after the league's 13-month investigation into the allegations that he engaged in physical violence against a former girlfriend in July 2016.

Elliott is expected to file his appeal of the NFL's ruling on Tuesday, a source told ESPN's Adam Schefter.

Elliott has denied the allegations, and Friday night on Twitter said: "I am both surprised and disappointed by the NFL's decision today, and I strongly disagree with the league's findings."

The suspension is scheduled to begin Sept. 2 and Elliott is eligible to return to the Cowboys' roster on Oct. 23, one day after the team's Week 7 road game against the San Francisco 49ers.

Elliott, 22, is accused by former girlfriend Tiffany Thompson of five domestic assault incidents in July 2016 in Columbus, Ohio, and has been under NFL investigation, although the city attorney's office already announced he will not face criminal charges.

Witten's family was affected by domestic violence when he was a child and the tight end's foundation serves women and families that have experienced it.

"Look, there's no place for a man to put his hand on a woman, and most of you guys know that it's a situation that's affected my family as a kid, and I put a lot of work and attention and have a platform to step out and speak on stopping domestic violence," Witten told reporters after Saturday night's loss to the Rams. "Having said that, Zeke is continuing to work through it, and he's talked about that. The game and all that stuff, that's not what you deal with. He's our teammate, and we'll continue to work through it with him and have this opportunity to grow from it, and I think that's what his focus is now. ...

"Quite frankly, it's uncomfortable even having the conversation right now, but you go through it, and (you're) in a position to be a leader, and you continue to show the way and allow guys to grow, and I know that's been a tough year on him. I think that his mindset has been such what he's said, what he's already released, I think that that's a pretty good perspective on what he's trying to do moving forward."

Elliott's father, Stacy, told ESPN's E:60 on Sunday in a statement that he was "surprised and very disappointed with (the) NFL's decision and disagree with the league's findings."

"I am 100 percent confident that Ezekiel's legal team will be able to show the world that he never abused this young lady!" Stacy Elliott said in the statement. "Ezekiel was drafted by the Dallas Cowboys at 20 yrs old. So he isn't perfect. But I am confident he will continue to learn from his life experiences."

The second-year running back is coming off a sensational rookie season in which he rushed for a Cowboys rookie-record 1,631 yards and 15 touchdowns.