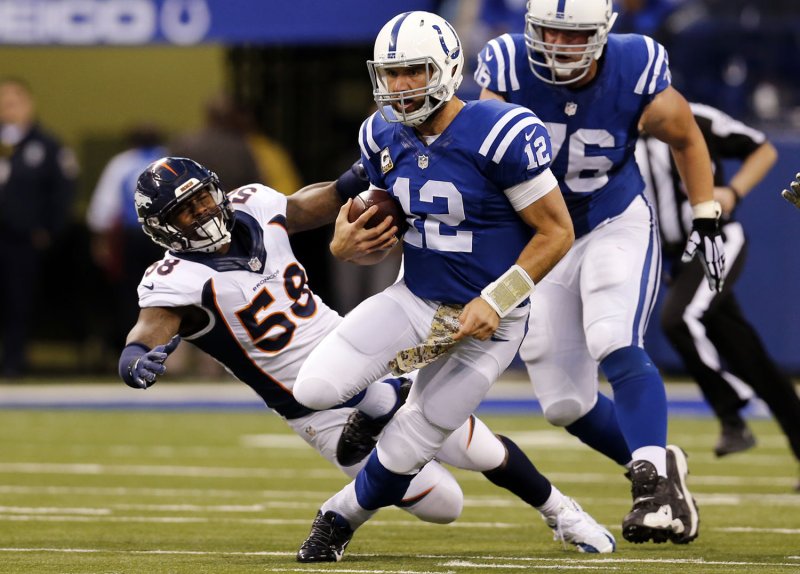 INDIANAPOLIS -- When the Indianapolis Colts veterans fleshed out the full training camp roster Saturday (July 29), the primary concern was whether quarterback Andrew Luck will be ready to play in the season opener.

Team officials have been almost nonchalant in referencing Luck's return from January labrum surgery on his throwing wing to repair an injury that lingered since 2015. But there is increased concern about when he will be ready to play and that concern was heightened when he began camp on the physically unable to perform list, unable to participate in practice.

Even Luck said he is not ready to commit to playing the regular-season opener on Sept. 10 against the Los Angeles Rams.

"It's hard for me to look beyond, really, today's rehab session," Luck said Saturday. "That's the approach I have to take ... if you want to get truly healthy. If you want to get better than you were before the injury."

But, in an effort to prevent panic, he dutifully espoused the party line.

Luck threw for 4,240 yards with 31 touchdowns and 13 interceptions in 2016 while trying to cope with the bad shoulder. After the January surgery he missed all OTAs and minicamp, but says he should be better off -- at some point.

"It does feel different than it did last year because I still have a ways to go in strength, still have a ways to go," Luck said. "But I know every day it's improved and I really feel this way, especially in the last couple weeks, month, I see the light at the end of the tunnel, if you will. I truly feel in my mind and in my heart that I know I'm going to be better. I really, really know I'm going to be better.

"No one wants to miss practice, no one wants to miss training camp, but I'm confident that when the time is right for me and when I'm able to practice -- whenever that is -- that I'll be up to speed and good enough to be productive in games and give this team my best."

RELATED Indianapolis Colts QB Andrew Luck: 'No reason to freak out' about shoulder

Interestingly, owner Jim Irsay and the Colts were aware of Luck's shoulder issues when they signed him to a five-year, $122.7 million contract that runs through the 2021 season. Luck is guaranteed $44 million.

Scott Tolzien was the top backup last season after coming to Indianapolis from Green Bay. Tolzien played well in his only start, a home-field loss to Pittsburgh. Inexperienced Stephen Morris looked good in practice and in last year's preseason games. Morris was on the practice squad last year and could be ready to push Tolzien. Undrafted rookie Phillip Walker is also on the roster, but the Colts haven't ruled out bringing in another veteran quarterback as needed.

The Colts restored safety Malik Hooker to the active roster on Saturday from the physically unable to perform list. The 15th overall pick in this year's draft tweaked a hamstring during a conditioning test Monday. The 21-year-old former Ohio State standout had hip and sports hernia surgeries before the NFL Scouting Combine. Hooker missed the Colts' offseason program.

Luck is still expected to be THE starter to begin the regular season, but his ability to at least be close to 100 percent is the big question. After not seeing any on-field work since the end of last season, he is expected to be rusty in terms of cohesion with his receivers. Tolzien and Morris will probably split the majority of the practice work once camp begins. Luck is slated to be on a pitch count when he is given the green light to return to the field.

Gore is coming off a 1,000-yard season, his best season overall since coming to the Colts prior to the start of the 2015 campaign. While his age (34) is a factor, Gore hasn't really shown signs of slowing down. Turbin impressed last season in spot duty and will most likely see a lot more work in 2017. He was particularly impressive in short yardage and goal-line situations. His abilities as a receiver out of the backfield and as a pass blocker also got positive reviews. Mack caught the eye of Colts officials this past spring and will be used as a change-of-pace back. If he can master the pass-blocking duties, he has shown the ability to be used in the passing game as well. Ferguson, meanwhile, needs to have a strong camp.

Doyle has moved from the third tight end on the roster to being the team's starter in a relatively short time. He has proven to be dependable as a receiver and is a pretty good blocker. Doyle has developed a strong chemistry with Luck. Swoope will get the chance to be the No. 2 tight end after a strong second half of the 2016 season. Williams is also in the mix and could win the primary backup job with a good camp.

Hilton and Moncrief are the Colts' top two receivers. Now, the question is who will make the push for the No. 3 spot. Aiken is a proven veteran who came to Indianapolis from Baltimore looking to be utilized more. Dorsett continues to flash at times but needs to become more consistent. He needs to play well and step up his overall performance. Rogers has been a pleasant surprise. Bray will be in the mix but will also be used on special teams.

Castonzo and Kelly are solid starters. Mewhort will be if he can stay away from the nagging injuries that have slowed his progress the past two seasons. Haeg looks to settle in at guard and could have a big future there. Clark got off to a slow start as a rookie last season but got better as the year progressed. Schwenke came over from the Titans and will provide solid leadership as a backup and potential starter. Good has started at guard or tackle; his natural spot is tackle. Banner is an interesting rookie with great size.

The Colts have been impressed by the potential of its rebuilt defensive line. Hankins comes over from the Giants and could play tackle or nose tackle. Woods is a former Tennessee Titans defensive lineman who looked good this spring. Langford is coming back from a season-ending knee injury. Anderson looks to be completely back from knee issues that have slowed his progress the last two seasons. Hunt is an ex-Bengals draft pick who will get a lot of opportunities. McGill just makes plays whenever he gets playing time. Ridgeway is also returning from injury issues but has impressed. Parry had off-field issues this spring. Rookie Basham and Stewart could push for playing time.

Lots of new faces at linebacker for Indianapolis heading into the season. Simon, Bostic, Spence, Sheard, and Mingo were all signed as veteran free agents during the spring and all are expected to make immediate contributions. Jackson and Morrison saw a lot of playing time for the Colts last year. Walker is a rookie who impressed once he arrived at OTAs in the spring. He can play inside and outside linebacker. Rhodes is also in the mix as a top backup.

Davis is the only sure thing in the secondary heading into training camp. Geathers did not participate in workouts last spring as he rehabbed an old injury. Hooker was the team's top draft pick but was held out last spring after undergoing surgery once his college season was over. Butler is making the move from cornerback to safety this year. Green has ability but is still raw. Wilson, a rookie, could push for a starting job. Farley, Melvin and Morris have proven to be dependable backups who could produce as starters if needed.

Vinatieri is the only returning key starter for the Colts special teams unit. He will be 44 when the season starts, but he still has a lot of tread on his tires and remains as one of the league's premier kickers. Locke, coming from the Vikings, takes over as the starting punter after the surprising retirement of Pat McAfee. Also gone is veteran long snapper Matt Overton, who is expected to be replaced by highly regarded rookie Thomas Hennessy. Bray impressed as a kick returner last season. Rogers handled the punt return chores for most of the 2016 season.