May 1 (UPI) -- Christine Michael probably knew he had a chance at being cut after watching the Green Bay Packers take three running backs in the 2017 NFL Draft.

It became official Monday when the team released the four-year veteran, according to NFL Network and ESPN. The Packers now have Ty Montgomery, Jamaal Williams, Aaron Jones, Devante Mays and fullbacks Aaron Ripkowski and Joe Kerridge on its depth chart at the position.

The Packers also waived Don Jackson on Monday. Jackson, 23, had 32 yards on 10 carries last season after signing with the team as an undrafted free agent.

"God's got a new plan for me and the NFL is a business !! Thank you to the Packers organization for taking a chance on me a year ago! #God100," Jackson tweeted Monday.

The franchise drafted Williams (No. 134 overall), Jones (182) and Mays (238) on Saturday in the fourth, fifth and seventh rounds of the draft. It also let Eddie Lacy walk in free agency this offseason.

Michael, 26, began his career spending two seasons with the Seattle Seahawks. He played briefly for the Dallas Cowboys in 2015, before returning to Seattle. He had 114 yards and a touchdown on 31 carries in six games for the Packers. Michael started out hot in the 2016 season, subbing for an injured Thomas Rawls. He scored seven touchdowns and had 565 yards from scrimmage in nine games for the Seahawks last season. He was waived in November and claimed the next day by the Packers.

The Packers resigned the running back in March as a free agent. His one-year, $800,000 contract included just $25,000 guaranteed.

RELATED Eagles going with another RB by committee

Michael was a member of the 2013 Super Bowl champion Seahawks. He has 1,215 yards from scrimmage and eight touchdowns in 37 career games. The Seahawks drafted Michael in the second round of the 2013 NFL Draft out of Texas A&M, where he was a teammate of Johnny Manziel, Ryan Tannehill and Mike Evans.

RELATED Bills not likely to pick up WR Watkins' 2018 option 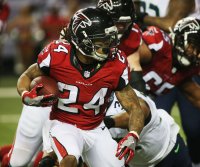