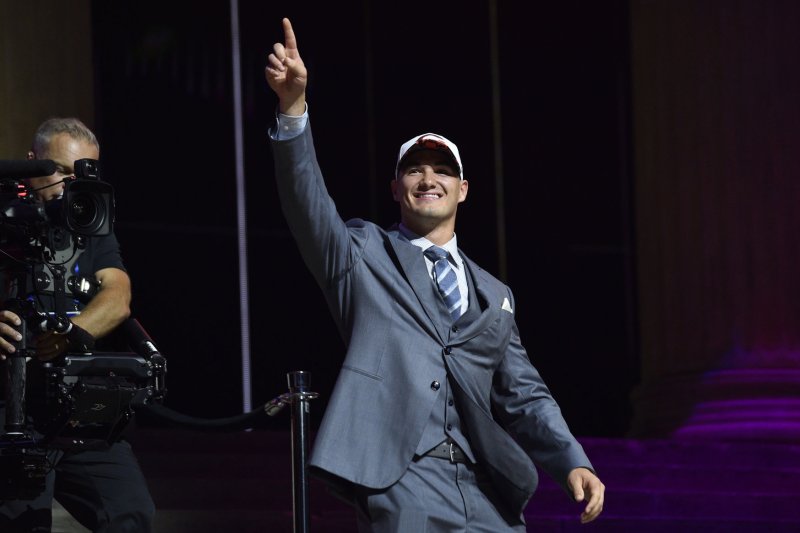 Mitchell Trubisky waves to the crowd after being selected by the Chicago Bears as the second overall pick in the 2017 NFL Draft at the NFL Draft Theater in Philadelphia, PA on April 27, 2017. Photo by Derik Hamilton/UPI | License Photo

That was the overriding theme of the Chicago Bears draft, beginning in the first few moments when they traded up only one spot, but to make a surprising pick, North Carolina quarterback Mitchell Trubisky.

Trading three draft picks to move up that one spot was a start to the wild ride. There were two more trades, one down in Round 2 and up in Round 4.

Along the way, the Bears also took: a Division II tight end (Adam Shaheen) higher than any D-II player had been selected since 2012; a safety (Alabama's Eddie Jackson) who hadn't played until his senior year of high school; an undersized running back (Tarik Cohen) when that position appears among the roster's strongest; and a D-II offensive lineman (Kutztown's Jordan Morgan) who played half a season of high school football before walking on in college.

He's Bears general manager Ryan Pace's guy, after giving up two third-rounders and a fourth-rounder to move up and make the pick. A quick-footed passer who can move in the pocket and out of it to make plays, Trubisky ran a Combine 40 time close to Deshaun Watson. He had only 13 games starting experience, but threw for three touchdowns or more seven times. Trubisky played behind Marquise Williams until his final season. Scouting reports say he needs to develop better downfield accuracy. He played in a shotgun offense and only began practicing snaps under center in January. A former Mr. Football in Ohio, leadership ability is counted among his greatest strengths.

Although he's from a Division II school, Shaheen wasn't a complete unknown. Dubbed by many scouts as "baby Gronk," his blend of speed and power made him a dominant player who set a Division II touchdown record (16) in 2015. Shaheen started out a basketball player in Division II before switching to football. He had been 195 pounds when he started college and then put on 83 pounds while making the move to football. "For a guy of his size, his athleticism jumps out," Pace said. "He's one of those guys when you're watching tape, you have to keep looking down and saying, 'Man, this guy's 6-6, 278 pounds and he moves like that?'"

The Bears dealt up from 117 and gave away their sixth-round pick to select Jackson at a need position. Jackson didn't play football for academic reasons in high school until his senior season, but made up for it as a senior. For the Crimson Tide, he had a knack for returning interceptions long distances, with a school record 303 yards in returns on nine career interceptions. It goes hand in hand with an ability to return punts. He returned the first punt he saw for a touchdown against Mississippi 85 yards. A cornerback originally, Jackson made a transition to safety as a junior and played both strong and free at different times. As a senior, he suffered a season-ending leg fracture and did not play in the postseason run for the Tide.

Black College Player of the Year and the MEAC all-time rushing leader, he was known for spectacular open-field cuts and quick bursts. Cohen averaged 7.5 yards a carry as a senior and is adept at receiving. He also can return punts, although he did this sparingly in college. One knock on his ability by scouts was how often he attempted to cut runs outside instead of letting interior blocking schemes develop. Cohen ran the 40-yard dash in 4.42 seconds, but said he stumbled on the first run or he felt he could have been in the 4.3s.

Cohen thinks his size will be a benefit instead of a weakness. "I think it will play a key role in helping me and benefiting me, because the linemen are going to be bigger, so it's really going to be hard to see me behind my linemen and I can use that to my advantage," Cohen said.

Morgan played only a half-year of high school football following an early-season injury as a senior. He then walked on at Kutztown and last year won the Gene Upshaw Award, given to the top Division II lineman. Morgan also was named his conference's top offensive player, an award usually reserved for skill position players. Morgan figures to play guard in the NFL rather than tackle because his reach is not as long as players in the 6-foot-5 to 6-foot-8 range. Nor does he have the massive size of mauling right tackles.