By
Jeff Reynolds, The Sports Xchange

A few years from now, the 2017 NFL Draft might be summed up in a single word: defense.

Defensive linemen and defensive backs dominate the NFLDraftScout.com top 50, starting at the top with defensive linemen Myles Garrett (Texas A&M), Jonathan Allen (Alabama) and Solomon Thomas (Stanford). Twenty-five of the top 40 players in the draft are defenders, per NFLDraftScout, including possible two-way star Adoree' Jackson, a USC cornerback with experience as a wide receiver.

The Cleveland Browns own the top pick Thursday when the seven-round draft opens in Philadelphia, the first of 11 selections for a franchise closing out a second decade of searching for a stable starting quarterback.

Da'Ron Payne (94) and Jonathan Allen (93) of the Alabama Crimson Tide tackle Clemson Tigers quarterback Deshaun Watson. File photo by Mark Wallheiser/UPI
For only the sixth time since the Browns returned to the NFL in 1999, the No. 1 pick is not expected to be a quarterback.

Garrett bears some physical similarities to 2014 No. 1 overall pick Jadeveon Clowney. At 6-4, 272, Garrett had a 4.64 40-yard dash (1.57 in the first 10 yards), a 41-inch vertical and 10-7 broad jump. The defensive end has been the presumptive No. 1 pick for months, even with the Browns leading a gaggle of teams in the top 10 with uncertainty at quarterback.

"We spent a lot of time with him," Browns vice president of football operations Sashi Brown said. "We learned a lot about what makes him tick, what motivates him, how he spends his downtime, how he spends his time with his teammates. He's an enjoyable young man ... bright, competitive. Whatever team gets him, particularly if it's us, would be proud to have him."

Clamoring for a quarterback in Cleveland is nothing new, although an argument could be made the need for a game-changing defensive end should also be a priority. The Browns registered 26 sacks last season (31st) and were also next-to-last in total defense.

Cleveland, which parted with Robert Griffin III and Josh McCown in the offseason, traded the No. 2 pick in the 2016 draft to the Philadelphia Eagles (Carson Wentz). Now the Browns are a candidate to make a move Thursday -- up from the No. 11 pick acquired via the Philly trade -- in an attempt to finally settle the QB spot without passing on Garrett.

North Carolina junior Mitchell Trubisky started only 13 games for the Tar Heels and is viewed as a future starter, but a limited sample size relative to Clemson's Deshaun Watson creates pause.

"Development potential is there," said Arizona Cardinals coach Bruce Arians. "The question is 'Why wasn't all that talent starting for the last three years?' That's always bugging me. So you have to go and answer those questions with him, with his coach, but the physical talent is there." 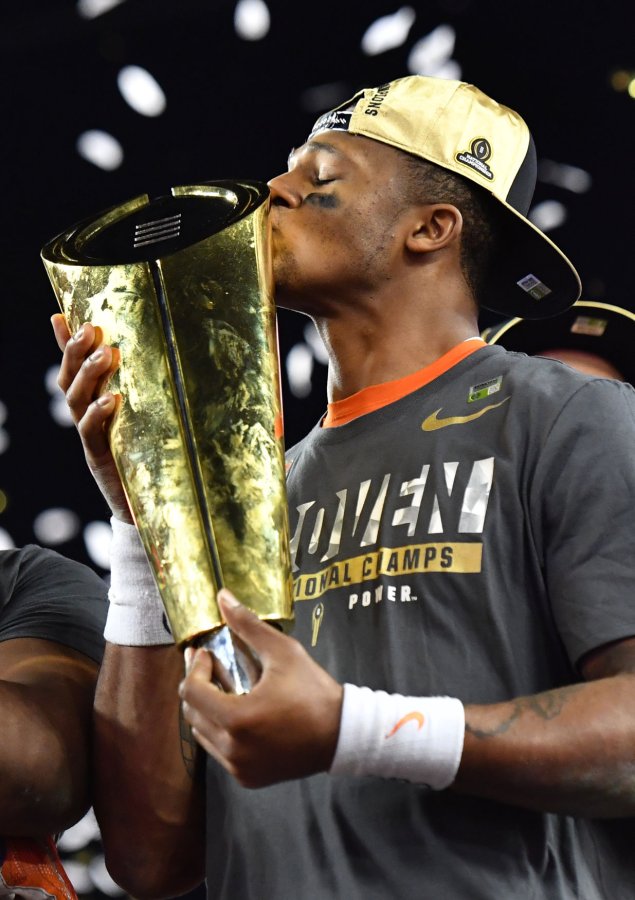 Clemson Tigers quarterback Deshaun Watson (4) celebrates with the Championship Trophy after Clemson defeated the Alabama Crimson Tide. File photo by Kevin Dietsch/UPI
Watson, a two-time high school player of the year in talent-rich Georgia, carried Clemson to the national championship in January and a runner-up finish to Alabama in January 2016. How his skills translate to a pro-style offense creates some consternation within scouting departments concerned -- particularly 30 interceptions in his past 30 games.
Advertisement

Wildcards at quarterback include Texas Tech's Patrick Mahomes, a gunslinger whose video-game stats came in a run-and-shoot offense, Notre Dame's DeShone Kizer and Cal's Davis Webb, who transferred from Texas Tech rather than sit behind Mahomes.

The general uncertainty and polarizing prospects at the NFL's most important position could lead to unexpected picks and added trade movement Thursday.

But defensive players, including LSU safety Jamal Adams and Ohio State defensive backs Marshon Lattimore and Malik Hooker, are rated ahead of most quarterbacks by NFLDraftScout.com. If general managers get their way and follow the best player available strategy, quarterbacks could be in for a considerable wait.

Then again, coaches could lobby for the quarterback, as was the case with the Eagles and Wentz last April

"You can be in a situation where every quarterback in the draft is still there at 13 or there could be three or four gone. You really can't tell," Cardinals general manager Steve Keim said. "You just have to be prepared and trust your board, which is one thing that we have done and I think we have done a good job of it."

The resurgence of running backs is likely to continue.

LSU Tigers running back Leonard Fournette (7) runs against the Alabama Crimson Tide. File photo by AJ Sisco/UPI
LSU's Leonard Fournette is compared to vintage Adrian Peterson with size, power and explosiveness and Stanford dynamo Christian McCaffrey, the son of former Broncos wide receiver Ed McCaffrey, has a gear for every job and even excelled when motioned out to slot receiver. Fournette, even at 230 pounds, is not one-dimensional and should benefit by proxy after Ezekiel Elliott led the NFL in rushing with the Dallas Cowboys. Elliott was selected fourth overall in 2016.

Oklahoma running back Joe Mixon has first-round talent, but evaluators could move him off the draft board entirely based on off-field concerns. Mixon, who measured a shade under 6-1 (6-feet 3/4-inches) and 228 pounds, turned in a pro day workout similar to Elliott. But Mixon wasn't invited to the NFL Scouting Combine in Indianapolis.

In July 2014, Mixon was arrested for misdemeanor assault after he punched a woman in the face, breaking her jaw and cheekbone. He received 100 hours of community service, underwent counseling and was suspended from the football program for the 2014 season. The gruesome incident was also captured on camera.

Another standout, Alabama linebacker Reuben Foster, was at the combine only long enough to be sent home from medical examinations after a spat with a physician. Foster, ranked 10th overall by NFLDraftScout.com, could be drafted much lower. In addition to the combine flap, Foster admitted to a dilute sample of his drug test in Indianapolis.

"I think it's wonderful and speaks volumes of our ability to help players develop and play at a high level and to be able to recruit some talented players that have an opportunity to develop and be someone that has a career as a football player in the NFL," Saban said.

Only days before the NFL Draft, Ohio State's Gareon Conley will not attend the draft on Thursday in Philadelphia following sexual assault allegations his attorney called "ludicrous and ridiculous."

NFLDraftScout.com ranks Conley second among cornerbacks and 22nd overall among prospects in the 2017 draft. The redshirt junior has a 4.44 time in the 40-yard dash and 37-inch vertical.