April 26 (UPI) -- Gareon Conley was expected to be a first-round NFL draft choice before being accused of sexual assault. He issued a statement Wednesday through his agency.

The 21-year-old cornerback from Ohio State has not been charged with a crime nor arrested. Investigators were gathering statements and had not interviewed Conley.

According to a Cleveland police report, a woman told police Conley raped her in a hotel room on April 9.

Conley was not at the hotel when police arrived. His attorney. Kevin Spellacy, denies the allegations.

"In my opinion this young lady is an opportunist and it's actually despicable," Spellacy told WOIO-TV Cleveland.

On Wednesday the highly regarded defensive prospect issued a statement, via Vantage Management Group, to the NFL Network.

"Statement of Gareon Conley Regarding Untrue, wrongful, and Malicious Allegations," the headline of the statement says.

"The allegations against me concerning the night of April 8/9 that have recently been reported in multiple media outlets are completely false," Conley said in the statement. "I did not commit a crime and have not been charged with a crime.

"I pride myself on doing things the right way on and off the field. The things being said about me and what happened that night are not true and don't fit my character at all. I realize that I put myself in the situation and I could have used better judgment. However, I have worked tirelessly to put myself in position to have the honor of being an NFL draft pick and these untrue allegations are putting a huge cloud over my name and the NFL Draft.

"These allegations appear to be an attempt to ruin this once-in-a-lifetime experience for me and my family. There were several witnesses, including another female, who were present the entire time and have given statements that give an accurate account of what took place. We also have video evidence that further discredit and disprove other versions of these events. I am upset but realize that I am powerless when false accusations are made and people try to convict you in the court of public opinion. It's sad that your name can get dragged through the mud based upon untrue and malicious allegations alone.

"A am completely confident that as the facts actually come out my name will be cleared. I was excited about participating in Thursday's draft but I have decided that it would be selfish for me to stay and be a distraction to the NFL, the other players and their families who have worked just as hard as me to enjoy the experience, so I will not be in attendance.

"I hope and look forward to the honor of being an NFL player and working to be the best representative, player, person and teammate that I can be for the team and the community I will be in."

"It happens every year," Lattimore told NJ.com. "A story like that comes out. I just hate that it had to be him. It is what it is. The truth is going to come out. We're going to see what's going to happen with that. I hope the truth comes out, that he's innocent. But, we're going to see."

Conley declared for the draft in January, after a spectacular redshirt junior season at safety for the Buckeyes. The 22-year-old is projected as a possible top 10 selection by several NFL.com draft analysts. 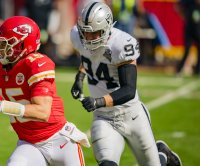