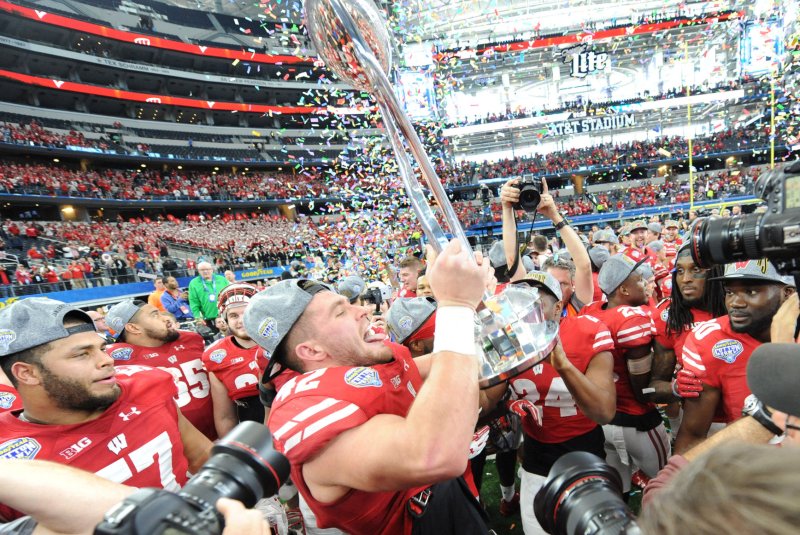 Wisconsin Badgers T. J. Watt celebrates the Badgers' 24-16 victory over the Western Michigan Broncos in the 2017 Cotton Bowl in Arlington, Texas on January 2, 2017. Watt is a fan-favorite to be selected by the Packers in the 2017 NFL Draft. File photo by Ian Halperin/UPI | License Photo

This is one in a series that covers each team, offering viewers information for homework, suggestions and then the opportunity to make a draft pick.

When the NFL Draft begins selections in Philadelphia April 27, the Green Bay Packers have the No. 29 pick in the first round.

Here is an in-depth look at the team's needs, offseason changes, potential best fit and the selections by NFLDraftScout.com's experts.

Who would you pick and why?

1. Cornerback: The return of Davon House to Green Bay after he bolted in free agency in 2015 for a starting job with the Jacksonville Jaguars doesn't heal a wounded position for the Packers. General manager Ted Thompson bid adieu to veteran standout Sam Shields early in the offseason in the wake of his repeated concussions, and integral defensive back Micah Hyde signed a free-agent deal with the Buffalo Bills. The absence of Shields for all but the opening game reared its ugly head throughout last season, culminating with the defenseless display on the back end against Matt Ryan and Julio Jones in the Atlanta Falcons' 44-21 NFC Championship rout. Though House should step right in as a starter, the Packers still could use a ready-made contributor early in the draft as they continue to wait on the development of young prospects Damarious Randall, Quinten Rollins and LaDarius Gunter.

2. Running back: Thompson fortified the team's bread-and-butter passing game by signing not one, but two big-play tight ends in free agency with Martellus Bennett and Lance Kendricks. That's good news for Aaron Rodgers, who has an abundance of options on the receiving end of his throws. Yet, the Packers have counted more key personnel losses than gains so far this offseason, and one of the big departures happened at running back. Eddie Lacy, thought to be a bell cow in the team's backfield for many years, is looking to get back on track after two subpar, injury-plagued seasons by joining the Seattle Seahawks. Coupled with the release of James Starks shortly after last season, that leaves the Packers with converted wideout Ty Montgomery and the re-signed Christine Michael as their top two ball carriers going into the spring workouts.

3. Outside linebacker: The cupboard isn't bare at the pivotal edge-rush positions in coordinator Dom Capers' 3-4 defensive scheme. Yet, the free-agent losses Julius Peppers (Carolina Panthers) and 2013 first-round draft pick Datone Jones (Minnesota Vikings) can't be brushed aside. Thompson allowed them to walk, however, after he re-signed Nick Perry to a huge five-year, $60 million contract. The return of Perry, who had a career- and team-high 11 sacks last season, gives Green Bay two productive bookends with Clay Matthews on the opposite side. However, Matthews is turning 31 later this spring and was hindered again by a variety of injuries last season, missing four games and finishing with a career-low five sacks. The Packers are counting on third-round draft pick Kyler Fackrell to take on a bigger role after limited playing time as a rookie, when he had two sacks, but another contributor from a deep class of edge rushers figures to be taken in the early rounds of the draft.

4. Guard: The Packers are faced with plugging in a starter at right guard for the first time since they shifted stalwart T.J. Lang there from the left side in 2013. That's because Lang's productive eight-year run in Green Bay is over after he cashed in as a free agent with a big contract from the rival Detroit Lions. Head coach Mike McCarthy has asserted that veteran Bryan Bulaga, who has experience playing guard, won't be moving from his longstanding spot of right tackle. Yet, the team's investment of a second-round draft pick in natural tackle Jason Spriggs last year may prompt some necessary line tinkering, unless Thompson hits on a capable interior player in the draft. The only viable options on the roster are versatile backup Don Barclay, recently signed first-year player Justin McCray and Kyle Murphy, a tackle who essentially had a redshirt rookie season as a sixth-round draft pick.

5. Defensive lineman: Thompson is a perfect 12-for-12 in taking at least one D-lineman in leading Green Bay's draft room since 2005. This draft figures to yield more of the same. Though the Packers signed ninth-year pro Ricky Jean Francois, formerly of the Washington Redskins, they still may want some more beef along the line. Veteran starter Letroy Guion has been suspended for the first four games of the season for a violation of the league policy on performance-enhancing drugs. That will mean a greater role for 2016 first-round draft pick Kenny Clark, who played well at the end of last season. The Packers also want to see more from second-year player Dean Lowry and have been waiting on young prospect Christian Ringo to be of help.

T.J. Watt, OLB, Wisconsin. An entire state of Packers and Badgers fans is clamoring for this selection to be made toward the end of the opening night of the draft. General manager Ted Thompson has held the successful Wisconsin football program in high regard for a long time. Interestingly, however, the Packers have taken only one player from the state's only Division I team on Thompson's watch since 2005, and that was wide receiver Jared Abbrederis in the fifth round in 2014. What's more, the last time Green Bay selected a player from Wisconsin in Round 1 happened in 1948 with back Earl "Jug" Girard. The emergence of Watt as a viable first-round pick would address a top need for the Packers.

They need to replenish some of their edge-rushing depth after Julius Peppers returned to his original team by signing with the Carolina Panthers, while former first-round pick Datone Jones moved over to the rival Minnesota Vikings. Thompson certainly has to take into account Watt's pedigree as the youngest of three brothers who will play in the NFL simultaneously. And, the 6-foot-4, 252-pound Watt's breakout season of 63 tackles and 11.5 sacks with Wisconsin last season has left many a general manager and defensive coordinator wondering whether he's capable of putting up those numbers on a consistent basis at the next level, a la big brother J.J., the three-time NFL Defensive Player of the Year with the Houston Texans.

Rob Rang: Gareon Conley, CB, Ohio State. With clear needs at edge rusher, cornerback and running back, general manager Ted Thompson has plenty of options with this pick with splashy athletes like UCLA's Takk McKinley and even Oklahoma running back Joe Mixon possibly in the mix. Conley, however, is the cleaner prospect on and off the field and fills a clear need with the sticky cover skills to help immediately.

Dane Brugler: Dalvin Cook, RB, Florida State. Running back isn't the top need, but value might win out over need here if Cook is on the board, giving Green Bay a much needed upgrade in the backfield.

Frank Cooney, IMO: While Wisconsin OLB T.J. Watt may be a good fit here, I'm thinking he may be gone (see Lions). And Gareon Conley may be one of the best corners in the draft, but NFLDraftScout.com rates 16 or so in the top 100, so the Pack will have other chances. So I'll hand off this pick to Florida State running back Dalvin Cook, who might diminish the need for Hail Marys by Aaron Rodgers, or at least help balance the offense.

OK, it's your turn. Tell us in the comments section who you would pick and why. Check out top 1,000 players rated by NFLDraftScout.com, including combine and pro day workouts, biographies, scouting reports.

Frank Cooney, founder and publisher of The Sports Xchange and NFLDraftScout.com, is in his sixth decade covering football and 25th year on the Pro Football Hall of Fame Selection Committee.