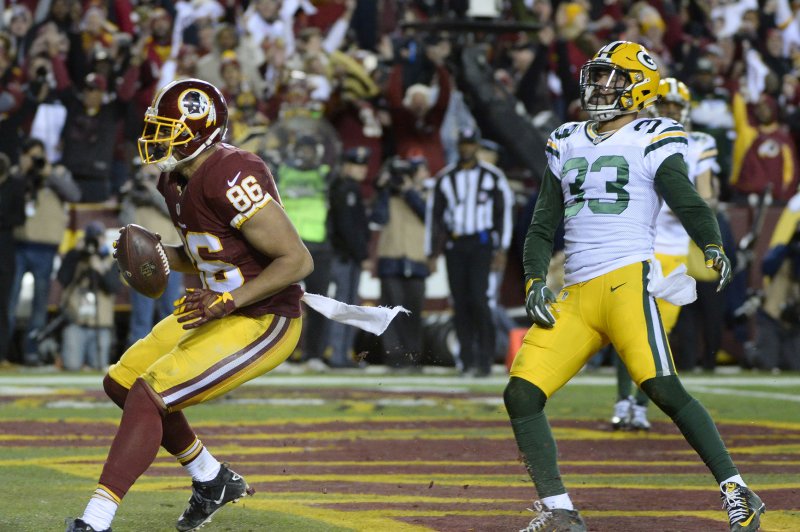 Green Bay Packers' Micah Hyde jumps into the crowd after running back a punt for a touchdown against the Detroit Lions in the first half of their NFL game at Lambeau Field on December 28, 2014 in Green Bay, Wisconsin. Rodgers left the game after the injury. UPI/Jeffrey Phelps | License Photo

March 10 The Buffalo Bills made moves to shore up the back of their secondary by agreeing to terms with safeties Micah Hyde and Jordan Poyer on Thursday's opening day of the free-agency period.

The 26-year-old Hyde has played both safety positions and cornerback during his four-year career. He recorded three interceptions last season and has eight in 63 career games (33 starts).

Top cornerback Stephon Gilmore, one of the coveted free agents in 2017, reportedly left the Bills on Thursday to join the AFC East rival New England Patriots.

Poyer missed the final 10 games of last season when he suffered a lacerated kidney. The 25-year-old free safety started all six games prior to his injury and has two career interceptions in 48 career games (10 starts).

Hausckha, 31, spent the past six seasons with the Seattle Seahawks. He was 33-of-37 on field-goal attempts last season and has converted 87.2 percent over nine NFL seasons.

DiMarco spent the past four seasons with the Atlanta Falcons. The 27-year-old has 37 career receptions for 273 yards and four touchdowns. The Bills coveted DiMarco even after signing free agent Mike Tolbert earlier in the week.

Williams suffered a season-ending neck injury in each of the past two seasons. The 26-year-old doesn't yet know if he will get to resume his career. He had seven interceptions in 59 games (52 starts) over six seasons with the Bills. 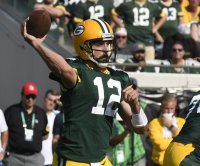 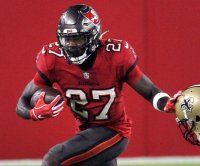 NFL // 20 hours ago
Buccaneers to start RB Ronald Jones vs. Falcons after Week 1 benching
Sept. 15 (UPI) -- The Tampa Bay Buccaneers will start Ronald Jones at running back in Week 2 against the Atlanta Falcons, coach Bruce Arians said. Jones fumbled in the second quarter in Week 1 and was benched for the rest of the game.

NFL // 1 day ago
Derek Carr, Raiders rally for wild OT win over Ravens
Sept. 14 (UPI) -- Derek Carr connected with Zay Jones with a 31-yard touchdown pass with 3:38 left in overtime to lead the Las Vegas Raiders to a win over the Baltimore Ravens and end Week 1 of the season in dramatic fashion.
Advertisement