Tony Romo expected to be cut 'within next two weeks' 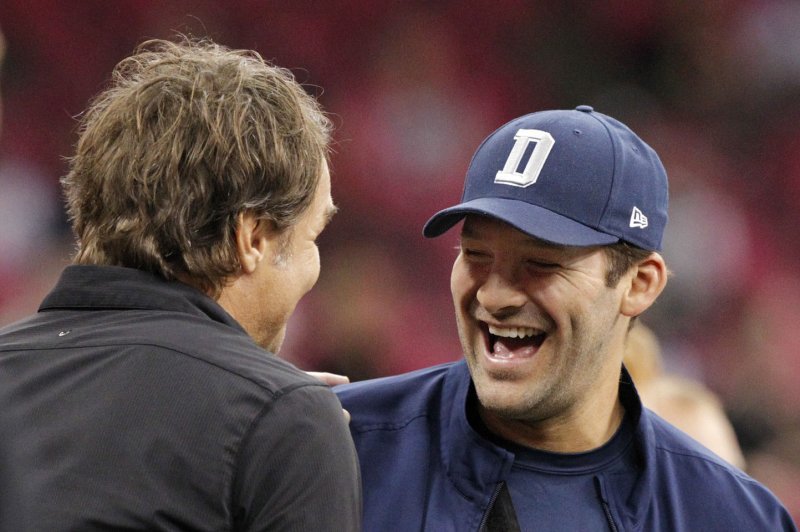 Dallas Cowboys quarterback Tony Romo talks with fans before the game with the New Orleans Saints at the Mercedes-Benz Superdome in New Orleans October 4, 2015. Photo by AJ Sisco/UPI | License Photo

Dallas Cowboys quarterback Tony Romo, right, watches as his former backup Dak Prescott warms up prior to facing the Baltimore Ravens on November 20, 2016 at AT&T Stadium in Arlington, Texas. Prescott has started in place of Romo all season.. Ian Halperin/UPI | License Photo

Dallas Cowboys Tony Romo sits on the bench during the Cowboy's game against the Washington Redskins at FedEx Field in Landover, Maryland on September 18, 2016. Romo is sidelined with a back injury. Photo by Kevin Dietsch/UPI | License Photo

Feb. 27 (UPI) -- Jerry Jones' decision on quarterback Tony Romo is on its way.

The Dallas Cowboys are expected to release Romo "likely within the next two weeks," according to the Dallas Morning News. Jones' team can access $5.1 million in salary cap space if it trades or releases the gunslinger. The franchise saves $14 million in cap space if it makes Romo a post-June 1 cut.

Dak Prescott will return as the Cowboys' starting quarterback after a stellar rookie campaign. The Cowboys aren't expected to bring back Mark Sanchez, but have interest in Josh McCown.

Reports on the Broncos have suggested that the franchise will be more interested in Romo as a free agent. 9News Denver's Mike Klis reported that the Broncos are "expected to at least discuss whether to pursue" Romo.

The four-time Pro Bowl selection is allegedly willing to "massage" his contract in order to "work within the cap constraints of a contending team..."