Jameis Winston and a guest arrive at the Wheels Up Super Saturday Tailgate event on the eve of Super Bowl LI in Houston, Texas on February 4, 2017. The New England Patriots will play the Atlanta Falcons in Super Bowl LI on Sunday at NRG Stadium. Photo by John Angelillo/UPI | License Photo

While speaking to third through fifth graders at Melrose Elementary in St. Petersburg, Fla., Winston demanded that the male students stand up while telling the female students to remain seated.

"All my young boys, stand up. The ladies, sit down," the 23-year-old Winston said, according to the Tampa Bay Times. "But all my boys, stand up. We strong, right? We strong! We strong, right? All my boys, tell me one time: I can do anything I put my mind to. Now, a lot of boys aren't supposed to be soft-spoken. You know what I'm saying? One day y'all are going to have a very deep voice like this (in deep voice). One day, you'll have a very, very deep voice.

"But the ladies, they're supposed to be silent, polite, gentle. My men, my men (are) supposed to be strong. I want y'all to tell me what the third rule of life is: I can do anything I put my mind to."

Winston later said that he was trying to keep the attention of the group.

"I was making an effort to interact with a young male in the audience who didn't seem to be paying attention, and I didn't want to single him out, so I asked all the boys to stand up," Winston said, according to the newspaper. "During my talk, I used a poor word choice that may have overshadowed that positive message for some."

Winston's words immediately came under fire, especially in the context that it was coming from a player who faced sexual assault allegations while at Florida State. The quarterback was never charged with a crime in the incident, but Winston settled a federal lawsuit filed by the woman in December.

Florida State also agreed to pay the woman $950,000 in January 2016 to settle a lawsuit she filed against the school for its handling of her Title IX complaint. 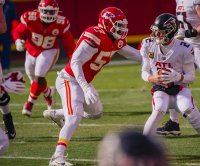