Minnesota Vikings QB Teddy Bridgewater (5) passes against the Oakland Raiders in the fourth quarter at O.co Coliseum in Oakland, California on November 15, 2015. The Vikings defeated the Raiders 30-14. Photo by Terry Schmitt/UPI | License Photo

At the time, it was evident he would miss the 2016 season. The Vikings recovered by trading for Sam Bradford, but hoped to get Bridgewater back for 2017.

That's not likely to happen, according to Bleacher Report's Jason Cole. Cole reported Friday that Bridgewater is expected to miss the entire 2017 season. Cole also reported that a Vikings source told him doctors are saying the "shortest recovery" time for his torn ACL and dislocated knee is 19 months. The injury occurred on Aug. 30. A 19-month timeline puts his estimated return date around March 2018.

Earlier this month, Vikings coach Mike Zimmer acknowledged he was unsure when Bridgewater would come back.

"We don't know when Teddy will be back," Zimmer said.

The Vikings won the NFC North in Bridgewater's last season as a starter. Bradford joined the Vikings on Sept. 3 after a swap with the Philadelphia Eagles.

Bridgewater is under contract for $2.18 million in 2017. The Vikings will make a decision on his fifth-year option in May.

ESPN's Ben Goessling reported that it "seems likely" the Vikings will exercise that option. Bridgewater had surgery in September.

"Teddy Bridgewater had his left knee surgically repaired yesterday," Vikings director of sports medicine and head athletic trainer Eric Sugarman said in a September team statement. "The procedure was performed by Dr. Dan Cooper at the Carrell Clinic in Dallas, TX. The knee dislocation resulted in Teddy needing a multi-ligament reconstruction. I was able to be present in Dallas, support Teddy and observe the entire procedure. The repair was excellent and gives Teddy every reason to be very optimistic."

"Teddy already began the rehab process yesterday, will return to Minnesota to continue on the road to recovery very soon and looks forward to getting back on the field."

Bradford threw for a career-high 3,877 yards and passed for 20 touchdowns against five interceptions, while setting the NFL single-season record with a 71.6 completion percentage in 2016. The 29-year-old is signed through the 2017 season.

NFL // 6 hours ago
Dolphins QB Tua Tagovailoa carted off after hard hit from Bills
MIAMI GARDENS, Fla., Sept. 19 (UPI) -- Miami Dolphins quarterback Tua Tagovailoa sustained a rib injury from a first-quarter hit he took from Buffalo Bills defender A.J. Epenesa on Sunday in Miami Gardens, Fla. He did not return to the game. 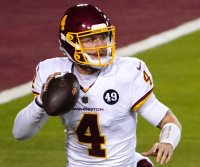