By Gethin Coolbaugh, The Sports Xchange
1/2 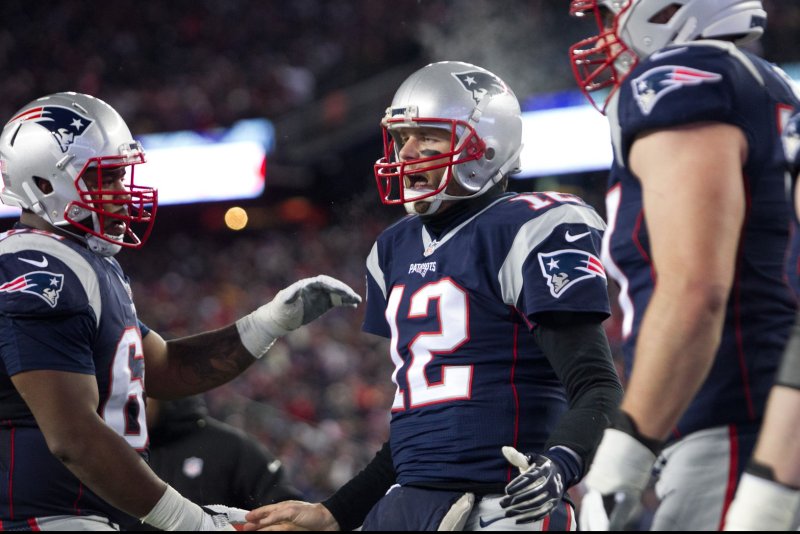 New England Patriots quarterback Tom Brady (12) celebrates with offensive lineman Shaq Mason (69) after a touchdown by running back Dion Lewis (not pictured) in the fourth quarter of the AFC Divisional game against the Houston Texans at Gillette Stadium in Foxborough, Massachusetts on January 14, 2017. The Patriots defeated the Texans 34-16. Photo by Matthew Healey/ UPI | License Photo

"I did OK," the New England Patriots running back said about his game.

Other would call it historic.

Lewis became the first player in NFL history to score a touchdown in three phases -- receiving, rushing and a kickoff return -- in a playoff game as the Patriots rolled into another AFC title game with a 34-16 victory.

But the fourth-year running back was more concerned with his two fumbles -- one he lost on a kickoff return in the second quarter and another the Patriots recovered on a rushing attempt midway through the fourth -- than any milestones.

"It's nice, but I'm just disappointed because I put my team in jeopardy, so I've got a lot of work to do," said Lewis, who rushed for 41 yards on 13 carries and caught two passes for 23 yards in his first career playoff game.

Lewis scored the game's first touchdown on a 13-yard touchdown pass from Tom Brady early in the first quarter, and later found pay dirt on a 1-yard rush early in the fourth.

Shortly after the Texans came to life and turned a Patriots' unsportsmanlike conduct penalty into three points, Lewis knocked them back down with his 98-yard kickoff return for a score with a minute to play in the opening quarter.

It was the Patriots' first-ever postseason kickoff return for a touchdown, and their first since Devin McCourty's 104-yard return against the New York Jets on Oct. 21, 2012.

"It was a great return," Lewis said. "Great execution, guys made their blocks. All season since I've been back, I knew we'd get one, but just haven't had too many opportunities to take it out with all those deep kicks."

Lewis continues to be synonymous with perfection, as the Patriots improved to 15-0 when he's on the field. He missed the last eight games of the 2015 season after tearing the ACL in his left knee and was sidelined for the first nine games this season.

"I'm just blessed to have an opportunity to be out here this year," Lewis said.

He is the fifth Patriots player to score three touchdowns in a postseason game. LeGarrette Blount holds the team record with four against the Indianapolis Colts in the AFC title game following the 2014 season.

"He's a phenomenal football player and a great asset to our team," Patriots wide receiver Julian Edelman said of Lewis. "It's great to have him out there."