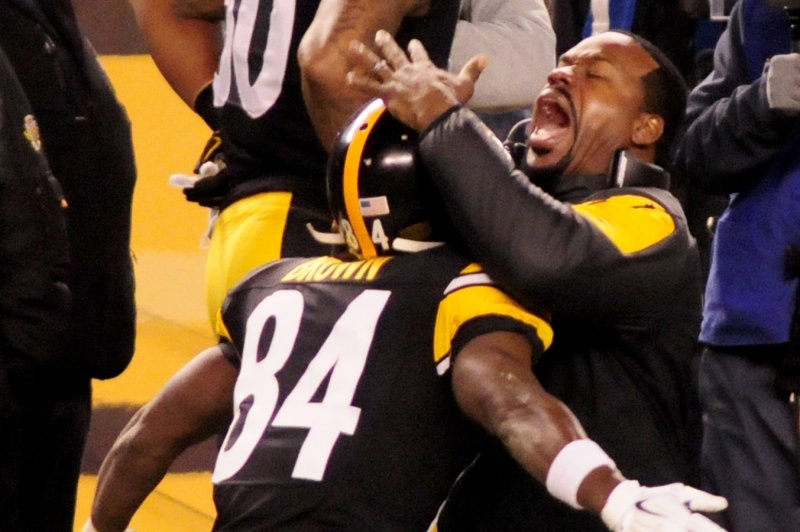 Pittsburgh Steelers head coach Mike Tomlin reacts to the penalty call as Steelers outside linebacker coach Joey Port yells at the official in the fourth quarter of the New England Patriots 37-26 win at Heinz Field in Pittsburgh on October 23, 2016. Photo by Archie Carpenter/UPI | License Photo

Pittsburgh Steelers Joey Porter (55) is held back by teammate Clark Haggens during the second quarter against the Baltimore Ravens at Heinz Field in Pittsburgh, Pennsylvania on December 24, 2006. (UPI Photo/Stephen Gross) | License Photo

Charges against Pittsburgh Steelers assistant coach Joey Porter were reduced Thursday after a district attorney's office viewed video of Sunday's incident outside of a bar.

Porter is still charged with disorderly conduct and public drunkenness from the incident that resulted in his arrest. Charges of aggravated assault involving a police officer, simple assault against a bouncer and resisting arrest were dropped by the Allegheny County District Attorney office.

"Today our office was able to view surveillance video showing multiple angles of the events that led to the arrest of Steelers coach Joey Porter," the district attorney's office said in a statement. "Following that review it is the position of the office that the only charges supported by the video are summary disorderly conduct and summary public drunkenness.

"Our office will proceed on those charges and barring any additional evidence that is brought forward, we will withdraw the other charges at the appropriate time."

Porter, a former Pittsburgh standout player, was placed on leave by the Steelers earlier this week.