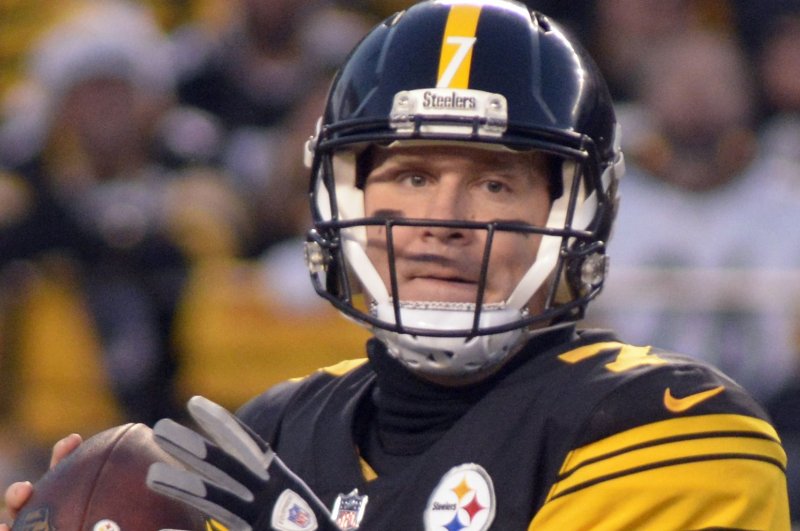 Pittsburgh Steelers quarterback Ben Roethlisberger (7) steps back to pass in the first quarter against the Baltimore Ravens at Heinz Field in Pittsburgh on December 25, 2016. Photo by Archie Carpenter/UPI | License Photo

Pittsburgh Steelers quarterback Ben Roethlisberger (7) steps in behind the center during the first quarter against the Miami Dolphins during the AFC Wild Card Playoff game at Heinz Field in Pittsburgh on January 8, 2017. Photo by Archie Carpenter/UPI | License Photo

Pittsburgh Steelers quarterback Ben Roethlisberger is out of the walking boot on his right foot after an MRI exam Monday showed "nothing severe" to an old injury suffered in Sunday's AFC wild-card game.

Big Ben is downplaying the late-game injury that landed him in a walking boot after Sunday's 30-12 win over the Miami Dolphins, telling Pittsburgh Post-Gazette columnist Ron Cook that it was merely for precaution and his right foot fine. Cook is co-host of the "Ben Roethlisberger Show" on 93.7 The Fan.

"(The MRI) showed I aggravated an old foot fracture but nothing severe," Roethisberger wrote to Cook in an email Monday. "I should be good to go."

The Steelers will travel to play the Kansas City Chiefs in Sunday's AFC divisional-round playoff game at Arrowhead Stadium.

RELATED Watch: Duke's Grayson Allen got away with another trip this weekend

ESPN reported that Roethlisberger avoided major damage and is still slated to start against the Chiefs.

Dolphins defensive end Cameron Wake appeared to roll over Roethlisberger's foot on a tackle attempt with 4:34 left in the fourth quarter. Roethlisberger attempted a pass while on the move and was intercepted by cornerback Xavien Howard.

"You're always worried about being hurt, but I'll be out there next week," Roethlisberger said after the game.

RELATED WrestleMania 34 to take place in New Orleans in 2018

Roethlisberger finished 13 of 18 for 197 yards with two touchdowns and two interceptions.

"I don't know if they had a conversation about staying in or out, but I love being out there with the guys," Roethlisberger said Sunday when asked about remaining in the game while the Steelers were up three scores.