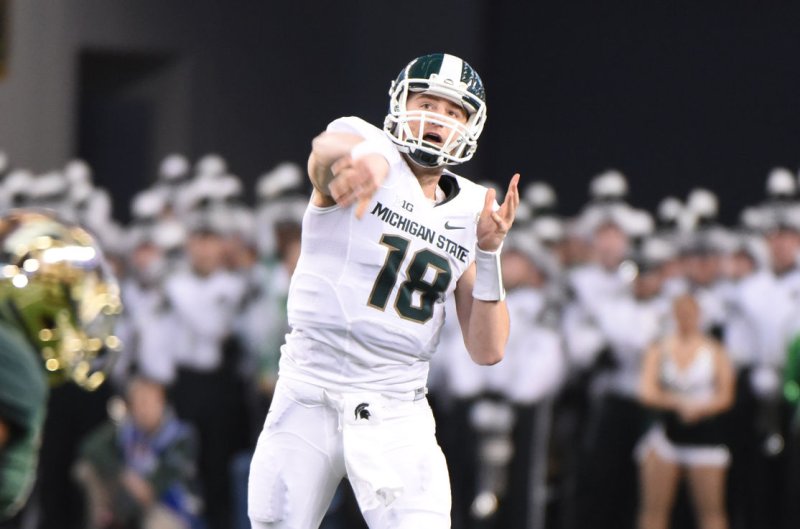 The 23-year-old Cook has a total of 30 snaps in his NFL career, all in the regular-season finale when he replaced Matt McGloin, who left Sunday's 24-6 loss to the Denver Broncos with a shoulder injury.

Cook was 14 of 21 for 150 yards with a touchdown, an interception and a lost fumble against the Broncos.

Cook will become the first quarterback in NFL history whose first start comes in the playoffs.

RELATED Detroit Lions to bring back Jim Caldwell in 2017

"It's obviously not ideal, that's why it's never happened where a rookie gets his start in a playoff game,'' Del Rio told reporters. "But he played well last week and he's the healthiest option so it makes it really an obvious choice.''

The Raiders had no other choice with Pro Bowler Derek Carr out with a broken leg and McGloin's shoulder injury causing him to miss practice.

Cook, a fourth-round pick from Michigan State, was the Raiders' No. 3 quarterback for 15 games this season.

RELATED Atlanta Falcons' Dwight Freeney not "even thinking" about retirement

"I'm just ready (to) embrace this opportunity and give it everything I've got," Cook said Wednesday.

Cook had a four-year career at Michigan State where he threw for 9,194 yards with 71 touchdowns and 22 interceptions.

"He won a lot of big games at Michigan State,'' Del Rio said. "I know this is a different level, but he's got that kind of unflappable feel about him. We're going to trust him to go out and lead us.''

Saturday will be Cook's first football start since Dec. 31, 2015, when Michigan State lost 38-0 to Alabama in the College Football Playoff semifinal. He had wins last season against Michigan and Ohio State.

"We played in some big time games there. Going to try to take whatever I did there and put it to use on Saturday," Cook said.

Del Rio said he hopes McGloin will be healthy enough to be Cook's backup.

Texans head coach Bill O'Brien named Brock Osweiler as the starter on Tuesday over Tom Savage, who sustained a concussion in Sunday's 24-17 loss to the Tennessee Titans.

Savage has not yet cleared the NFL's concussion protocol, but O'Brien said there was still a chance Savage could be available to play although not as Osweiler's backup. Now, Brandon Weeden will be active as the backup quarterback Saturday.