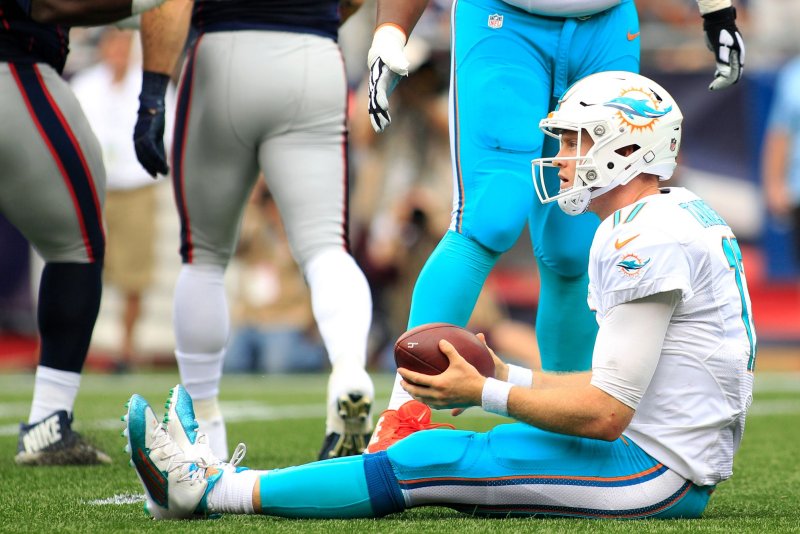 Miami Dolphins quarterback Ryan Tannehill (17) sidelined since Week 14 with a sprained ACL and MCL in his left knee, sat out practice on Wednesday but still could return for Sunday's wild-card game against the Pittsburgh Steelers. File Photo by Matthew Healey/ UPI | License Photo

Miami Dolphins quarterback Ryan Tannehill did not practice Wednesday due to his left knee injury but still could return for Sunday's wild-card game against the Pittsburgh Steelers.

Tannehill has been sidelined since the Dec. 11 game versus the Arizona Cardinals in Week 14 with a sprained ACL and MCL in his left knee.

Coach Adam Gase told reporters on a conference call with the Pittsburgh media that the staff will decide later if Tannehill will practice Thursday.

Gase said starting Tannehill in Pittsburgh without any practice reps "would be hard for us to do. I need to see him move around with traffic around him, how his escapability is."

Gase acknowledged that Tannehill's mobility is a critical part of his game.

"All of a sudden to throw him back there and say, 'Don't move, and if anybody gets close to you, go down.' That;s not really an option for us." Gase said Wednesday. "It's not his style of football. We have to make sure that we feel comfortable with the way that he's moving around. Really, at the end of the day, you have to be able to protect yourself and so much of his game is movement.

"Every day, we keep seeing improvement. It's going to be more about, 'Where's his movement at?' ... We'll keep doing what we've been doing with him, and we'll make a decision on tomorrow as far as what we're going to do at practice."

Backup quarterback Matt Moore continues to get first-team reps in practice. He is 2-1 since replacing Tannehill, throwing for 721 yards, eight touchdowns, three interceptions and has a 105.6 passer rating in four games.

The Dolphins (10-6) are making their first playoff appearance since 2008.